If Chins Could Kill: Confessions of a B Movie Actor, by Bruce Campbell (Aurum) | review by Stephen Theaker 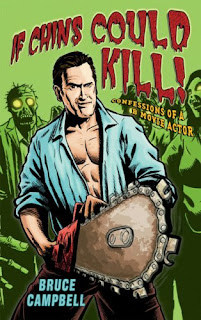 One of the first things we learn about Bruce Campbell in this partially updated autobiography is that he was quite an awful young man. He shoots a girl, peeps on women, and deliberately directs fireworks at a neighbour’s house, almost hitting her. At least that makes it easier to laugh later on when we read about Sam Raimi putting him through hell while filming The Evil Dead, the film that put them both on the map – though not necessarily in the pink. One of the big surprises of the book is that even though Bruce Campbell was regarded by fans as a star, he wasn’t always financially comfortable. “People often wonder why some actors fall off the face of the Earth for no apparent reason,” he writes. “I’ve got news for you – there is always a reason, and frustration with the business is a huge factor.” Makes you glad he had such a long run on Burn Notice, even if it never felt like we got the full Bruce on that show. We do now, in buckets (of blood), on Ash Vs Evil Dead, and this book shows us how that all began, in lots of detail, from the early films they made to show their friends, to raising the money to make the film, something in which Campbell was much more involved than you might have expected an actor to be. If raising the money was hard, filming it was a frozen nightmare, and that it turned out so well is a testament to the ingenuity, imagination and endurance of all involved. The book goes on to cover the rest of Campbell’s career, in greater or lesser detail depending on whether he has a good anecdote to tell. The day he spent on the set of The Quick and the Dead turned up trumps in that regard, and it was also very funny to read about his work on the film version of McHale’s Navy, where he launched Operation Screentime with French Stewart, an attempt to beef up the roles of their underused characters. It’s a book of short chapters, that’s fun and easy to read. It’s the first time I’ve read a book typeset entirely in a sans serif font, but there are pictures on almost every page so you can understand why the UK publisher probably didn’t want to retypeset it. ***
Posted by Stephen Theaker