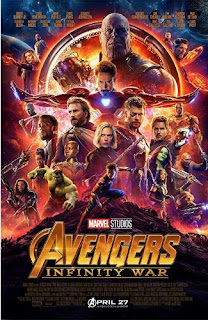 Big purple guy gives Avengers/Guardians of the Galaxy a run for their money, and helps them make a ton of money

Since Robert Downey Jr’s Tony Stark first blasted onto the scene in Iron Man (2008), the Marvel Cinematic Universe (MCU) has pumped out 18 additional films… and changed the moviegoing landscape. Many thought that the latest offering, Avengers: Infinity War, which unites most of the Avengers plus the more adult-focused Guardians of the Galaxy in one of the most expensive movies ever made, was bound to break the opening weekend box office record. It did.

Infinity War, directed by Anthony and Joe Russo, doles out a lot of what Marvel fans want: humour, spectacular fight scenes, the universe in peril, strained relationships, and settings both earthbound and otherworldly. But this installment also delivers the Avengers’ most formidable foe to date, and with him, some unpredictable outcomes.

Because of Infinity War’s large cast – this was the first time this reviewer got a playbill at the cinema – it cannot focus on a single hero for long. Therefore, the character who grabs the most screen time is the villain. Thanos (Josh Brolin), a Hulk-sized purple warrior-king, wants to achieve balance and preserve the universe’s resources. Sounds like a noble goal. Unfortunately, his method – annihilate half of the universe’s population – is rather extreme. To carry out his plan, Thanos must secure six infinity stones spread throughout the universe. He already has some, while others are protected by certain protagonists… a problem for Avengers and company, since Thanos will stop at nothing to achieve his end.

Fight scenes range from magical showdowns in the streets of New York and Scotland to off-planet confrontations to all-out brawls in Africa. Though Infinity War doesn’t match the humour of Thor: Ragnarok, it does offer its fair share. Among the film’s most humorous exchanges are the verbal sparring between big egos like Iron Man and Dr. Strange (Benedict Cumberbatch), and even more so Peter Quill/Star-Lord (Chris Pratt) and Thor (Chris Hemsworth). Arguably, the Guardians Peter Quill and especially Drax (Dave Bautista), with their impulsive and sometimes juvenile actions, stand out as the funniest. Another humorous character is Peter Dinklage’s Eitri, a weapon-forging giant whose ultra-dramatic, deep utterances don’t always fit with what he’s saying.

And what about the casual filmgoers, those who don’t spend most of their waking hours watching and reading everything they can about these characters? Will they still enjoy this film? Absolutely. There is something appealing about many characters with superhuman abilities coming together to protect life. And there is something appealing about a brutish, yet brilliant villain who wants to destroy life… or does he want to preserve life? Thanos is, in some ways, an embodiment of the MCU, which has barreled through the contemporary film scene. In its opening weekend, Infinity War made $258.2 million in the U.S. and more than $630 million worldwide. Now that’s power.
– Douglas J. Ogurek *****
Posted by Douglas J. Ogurek