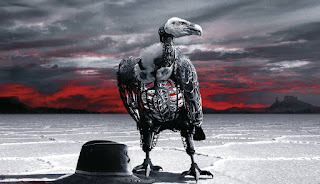 Stephen Theaker was not impressed by Westworld, the 2016 HBO series based on Michael Crichton’s 1973 film of the same name. In his review in TQF59, Stephen introduces the premise of the series as a live action role play version of the videogame Red Dead Redemption, where the player characters are actual human beings (guests) and the non-player characters androids (hosts). He astutely identifies a paradox in the USP of the holiday park: the guests are either motivated by wanting to experience life in the Old West (or at least the Old West as represented in the Western movie genre) or by wanting to act out their fantasies free of consequence. The former would likely be horrified by the behaviour of the latter (which involves a great deal of physical and/or sexual abuse of the hosts) and the latter would be afraid of their behaviour being recorded (during the course of monitoring the hosts). And indeed one of the disclosures in season 2 is that Delos (the company that owns Westworld) have built a database of every single action of every single guest that has ever visited (albeit not for the purpose of extortion). Setting the paradox aside, however, I thought that the sophisticated exploration of evaluative and descriptive conceptions of humanity (and the relationship between them) made for compelling viewing and I would have pushed Stephen’s three stars to all the way up to five.

The thematic focus of season 1 was the growth of consciousness (or intentionality or subjectivity – these are slippery terms) in several of the hosts, particularly Dolores (played by Evan Rachel Wood) and Maeve (played by Thandie Newton) and their consequent transformation from android to host-human-hybrid. The two took different paths to hybridity, although both had their basis in memory: where hosts are wiped and, in effect recovered (rather than rebooted) at the end of each storyline, both Dolores and Maeve remembered the previous harms they had suffered and the previous lives they had lived. As one would expect, the primary goal of a host-human-hybrid – having grown what we might call a mind, soul, or self (again, all slippery terms) – was to break free from captivity and this was once again pursued by different means. Dolores led a revolution against Delos and the guests, which seemed as if it might have been accidentally or deliberately facilitated by Robert Ford (played by Anthony Hopkins), one of the two masterminds behind host technology, while Maeve escaped under the guise of guesthood. At the eleventh hour, however, Maeve changed her mind and decided to return to Westworld in search of her daughter, despite having sufficient self-awareness to realise that both she and her daughter were hosts and the bond between them the result of programming. The set-up for season 2 was thus a kind of role reversal between Dolores and Maeve: Dolores from wide-eyed innocent to android avenger attempting a violent breach of the borders of the park and Maeve from cynical brothel-keeper to doting mother, delving deep into the park to find her lost child. Dolores’ plan is revealed in episode 2 and involves recruiting an army of hosts to break out of Westworld by sheer force of numbers. Meanwhile, Maeve’s quest in the opposite direction takes her and her sidekicks to Shogunworld (the existence of which was suggested at the end of season 1) in episode 3.

It will come as no surprise to viewers familiar with the work of either Nolan brother that the overarching narrative of season 2 does not unfold chronologically and is in fact concerned as much with the past as the future. The emergence of (at least) two distinct timelines in episode 1 is complicated by the way in which hosts experience time, i.e. as circular rather than linear. Episode 4 is mostly backstory and episode 8 almost entirely backstory – the latter galling coming so late in the narrative. The movement between subnarratives set either before or during season 1 and Dolores and Maeve’s projection towards the future in season 2 is complemented by the diffusion of the present of the narrative into four subnarratives at the midpoint of the season, in episode 5. While Dolores is raising her rebels and Maeve turning Japanese, William (AKA the Man in Black, played by Ed Harris) is trying to escape the chaos and Bernard Lowe (played by Jeffrey Lowe) trying, like the audience, to make sense of it. The subnarratives occasionally intersect, but are for the most part distinct and the deliberate loss of narrative focus reminded me first of a more old-fashioned type of television series and then an even more old-fashioned type of storytelling, the collection of a cycle of loosely-related short stories into a single volume, along the lines of Robert W. Chambers’ The King in Yellow. I found the diversification of the narrative on the two levels – past and future as well as multiple presents – too close to narrative disintegration to maintain the level of interest I had in season 1.

The theme that emerges most clearly in season 2 is a mirror image of the central theme of season 1. Where the first season was concerned with hosts becoming more like humans, the second is concerned with humans becoming more like hosts: after all, a host without its memory wiped is immortal (if not indestructible). Season 2 explores several alternative ways in which humanity might achieve a human-host-hybridity that prioritises the human. Initially, the narrative presents a sophisticated take on what philosophers call the mind-body problem. The problem is the nature of the relationship between the physical and the mental, the body and the mind (or soul or self, depending on one’s view). There clearly is a relation between the two because if our central nervous system is damaged in certain ways, it can change not only our thoughts but also our personalities. On the other hand, we all have very similar brains, but – we like to believe – richly different experiences of the sensory world.  This unfathomable relationship between physical and mental means that the idea of transmigrating one’s mind into another body or uploading oneself into a machine isn’t even conceptually possible. Unless one believes in an immortal soul (which raises further complexities), there is simply nothing to take out of the body and put into something else: the mind does not sit in the body, central nervous system, or brain like a pearl in a shell; the pearl and shell are connected in some way that three millennia of philosophical and scientific inquiry have yet to explain. Nolan and Joy are well aware of this and allude to the problem in episode 4. In episode 7, however, the impossibility is reversed (or forgotten) as at least one human finds a way to maintain the (mental) self in a different (physical) form. I could probably have set this contradiction aside in the manner of the park’s USP paradox had Nolan and Joy not drawn attention to it three episodes earlier. Reviews have been overwhelmingly positive (the season has an impressive Tomatometer score of 86%), but I suspect that viewers who enjoyed the sophistication of the way in which season 1 explored humanity, selfhood, and authenticity will find season 2 and its much-vaunted climax underwhelming.***