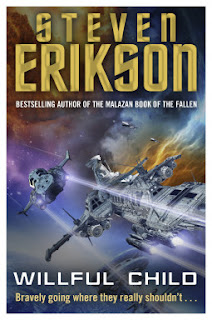 Halley Sin-Dour is his Spock, Saavik and Number One. She makes announcements in “in a deep, full-throated voice that rolled out, came back, and landed in Hadrian’s groin”. Combat specialist Lieutenant Galk comes from a world where the dictionary entry for mundanity runs to thirty pages, and Doctor Printlip deflates whenever he speaks for too long. Pilot Jocelyn Sticks was personally selected by the captain on the basis of her file photo, and he looks forward to the way that “from his position in the command chair, she would have to twist her upper body round to address him”. Hm.

The captain remembers television. He wears a polyester uniform, records a personal log, and insists on a view of the stars when they are in transit. The ship’s ongoing mission, according to him, is to “to seek out strange new worlds on which to plant the Terran flag, to subjugate and if necessary obliterate new life-forms”. Their first assigned mission is to investigate the smuggling of knockoff Terran sports apparel in the Blarad System, but the ship gets infected with a mysterious AI, Tammy, who takes them off to the Exclusion Zone, deep inside Radulak-Klang territory. This leads to an appropriately episodic series of adventures that provide plenty of novelty and surprise.

Science fiction satire may be a departure for Steven Erikson from the fantasy of the Malazan Book of the Fallen and the brilliant Bauchelain and Korbal Broach novellas, but this isn’t a feeble Game of Groans parody of a genre’s surface quirks; it retains the abrasive intelligence that characterised those novellas, and applies it to a deep understanding of the foibles and structures of Star Trek. Steven Erikson credits his wife for telling him “screw everything – just write the damned thing!” It feels like a passion project rather than an opportunistic cash-in on the success of John Scalzi’s Redshirts.

“See what comes with standardizing every approach on the ecliptic?” observes the captain after a near miss with a heavy freighter. “Ridiculous, you’d think we were boats or something.” (Star Trek II: The Wrath of Khan famously took its cues on everything from uniforms to space battles from the Horatio Hornblower series.) The book references everything from Wesley Crusher to the way Kirk cheated on the Kobayashi Maru test, while constantly interrogating the premise of the show. Would the human race be wise to hang its hopes on a Captain Kirk? Would a galaxy dominated by humans (“a voracious, appallingly shortsighted sentient species”) be such a good idea?

The problem is that the book’s affectionate spoofing of sex-obsessed Kirk means it features a good deal of sexism itself, and though it’s coming from a particular character’s mouth and point of view some readers may find it a bit too much. To add another example to those above, at one point the captain watches a “marine cross the bridge, gaze fixing on the meaty sway of her behind”. As a thirteen-year-old I might well have thought “meaty sway of her behind” the most evocative phrase I had ever read, and I’d probably have thought this the best book ever written. Being an adult, I enjoyed it despite the lechery, rather than because of it.

The captain does turn out to have rather more to him than at first appears, which makes for an interesting plot, and along with the number of times he comes a cropper it’s hard to think the book endorses his behaviour. It reminded me of the animated television series Archer. Archer, a secret agent, is another gifted, overconfident and oversexed buffoon, but he is partnered with Lana, who constantly calls him on his sexism, and reminds viewers to laugh at him, not with him. A Lana might have done Captain Sawback some good.

“Hostile planets, hostile aliens. Hostile aliens on hostile planets,” says the captain, “and out there, in that unending cavalcade of danger, I intend to enjoy myself.” Many readers will enjoy themselves too, but read a preview before buying, just in case. I’d like to read a sequel or two – it has the vigour, sauce and sense of adventure that latter-day Star Trek sorely lacked – but I wouldn’t argue with anyone who loathed every word. ***

This review originally appeared in Interzone #256.
Posted by Stephen Theaker