The Meg | review by Rafe McGregor 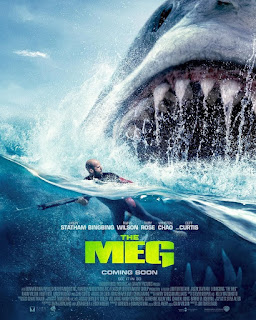 I first watched Steven Spielberg’s Jaws (1975) on the small screen in the late seventies or possibly in 1980 or 1981 – some time in the second half of my first decade. I don’t remember the year or whether my experience was courtesy of videotape or 8mm film, but I do remember being absolutely, completely, and utterly terrified. So scared that for a weeks I was reluctant to bath, let alone swim in a pool. That didn’t last, but the fear of sharks did. Not exactly clinical galeophobia or even enough to keep me from swimming in the sea, but enough to cause some of the physical symptoms of the phobia for nearly four more decades of seeing sharks on film and in dreams. As is well known, Jaws became the prototypical Hollywood blockbuster and its form, style, and content have been emulated with more or less success for forty-three years. The film also became a franchise, spawning three sequels with diminishing critical and commercial returns: the best thing about Jaws 2 (1978) was its tagline (“Just when you thought it was safe to go back in the water”); Jaws 3-D (1983) was as disappointing as the other attempts to revive 3D cinema in the early eighties; and Jaws: The Revenge (1987) was nominated for eight Golden Raspberry Awards, achieved a rare but well-deserved 0% on the Tomatometer, and showed that even the great Michael Caine can make poor career choices. None of the four were, however, financial failures and the shark movie was soon established as a subgenre of the horror film.

In consequence, Jaws has been responsible for four decades of mostly poor shark movies. There have been a couple of exceptions – such as Renny Harlin’s Deep Blue Sea (1999) and Andrew Traucki’s The Reef (2010), both of which employed original takes on Spielberg’s initial conception of the shark as monster – but they have been regrettably rare. Mario Van Peebles’ USS Indianapolis: Men of Courage (2016) also deserves mention: it is history rather than horror, but the reality behind the representation doesn’t detract from dread of the longest and most deadly shark attack on record. The best of the bad are probably Open Water (2004), Dark Tide (2012), The Shallows (2016), and 47 Meters Down (2017), all of which have some quality in either innovation or casting. Moving from the bad to the ridiculous there have sadly been dozens of B-movies along the lines of The Last Shark (AKA The Great White, 1981), Night of the Sharks (1988), Deep Blood (1990), Cruel Jaws (1995), Shark Attack (1999), Shark Swarm (2008), 2-Headed Shark Attack (2012), 3-Headed Shark Attack (2015), 5-Headed Shark Attack (2017) – curiously, no four-headed shark attack (maybe they are friendly) – and the Sharknado franchise (five films released since 2013 with a sixth due later this month). 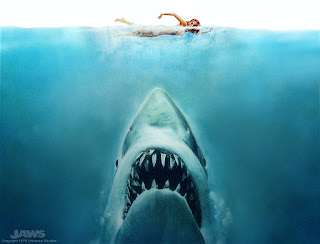 We can blame Jaws for decades of celluloid dross, but a far more damaging consequence was its impact on cultural perceptions of sharks as a clear and present danger to humanity – or at least humanity on, in, or under the water. Depending on which source one uses, the film either popularised or contributed to the popularisation of shark hunting, which in turn contributed to a steady decline in shark numbers, up to 90% in several species. The Western Australian shark cull, an implement of official government policy, began as recently as 2014 and was only terminated last year. A large number of shark species are currently considered either vulnerable or endangered. Statistically, one is as likely to be killed by a shark as a wolf and much more likely to be killed by lions, crocodiles, dogs, and a variety of insects, the most dangerous of which is the mosquito. Mosquitos don’t have quite the cinematic appeal of sharks and I’ve often wondered what it is about the latter that I find so frightening. Perhaps it isn’t sharks as such, but the fact that humans are always out of their depth in water, always cumbersome and clumsy with severely restricted vision, hearing, and smell. On the other hand, someone once suggested to me that the most terrifying monster imaginable was a giant disembodied mouth and a shark’s anatomy – particularly as represented on screen – seems little more than a delivery system for a giant mouth crammed with superhuman teeth complete with extendable jaws. Jaws…precisely.

If you are scared of sharks, like I am, then you may agree that the only thing more frightening than a shark is a bigger shark, which explains the contemporary fascination with Megalodon, a prehistoric shark species that disappeared over two and a half million years ago (sixty million years after the extinction of the dinosaurs). Fossil evidence reveals that Megalodon was similar to the Great White in appearance, but with blunter and wider jaws, and estimates of its length range from 10.5m (34ft) to 25m (82ft). As an aside, the famous Jaws poster – a mouthful of teeth attacking an unsuspecting swimmer from below – depicts a shark of Megalodon rather than Great White size. The largest verified Great White was just over 6m (20ft) and even Bruce, Spielberg’s mechanical shark, was just over 7.5m (25ft) in length. Fascination with Megalodon was fuelled by the discovery of a Coelacanth, a species of fish believed to have disappeared at the same time as the dinosaurs, off the south coast of South Africa in 1938. The giant shark has inspired numerous documentaries, including a now-notorious episode of the Discovery Channel’s Shark Week, “Megalodon: The Monster Shark Lives” (aired on 18 October 2013), which faked a Megalodon attack and sighting off the coast of Cape Town. The channel was widely criticised and George Monbiot wrote an intriguing (but distressing) article for the Guardian linking the pseudo-documentary directly to the Australian cull.

In addition to documentaries there have of course been Megalodon B-movies, thankfully few due to the difficulties of reproducing the monster on screen: Shark Attack 3: Megalodon (2002), Megalodon (2004), Attack of the Jurassic Shark (2012), and Sharkzilla (2012). This small collection includes many truly appalling special effects, but one of the few interesting aspects of Megalodon movies has been the tendency to exaggerate the size of the shark. This is of course permissible in a filmic fantasy – a shark the size of a submarine is no less believable than a shark resurrected after millions of years – but I think there is a sweet spot when it comes to size and fear, captured by Steven Spielberg in his focus on the Tyrannosaurus Rex in Jurassic Park (1993). T-Rex is big enough to rip a human being to pieces in as painful and personal a manner as a Velociraptor, but nowhere near the size of Godzilla, for whom a human being doesn’t provide enough calories to make the effort of eating one worthwhile. The monsters in Roland Emmerich’s Godzilla (1998) and Gareth Edwards’ Godzilla (2014) inspire shock and awe, but not the instinctive, visceral, stomach-churning fear of an approaching T-Rex. Too small means too vulnerable to contemporary technology, but too large means too distant and impersonal, a threat to the human species rather than the individual human being. This is the first note that The Meg strikes skilfully: the shark is giant rather than gargantuan, albeit it is at the top end of the estimates based on fossil evidence.

The premise of the story seemed surprisingly plausible – for someone with my limited oceanographic knowledge, anyway. Dr Minway Zhang (played by Winston Chao) and his team, which includes his daughter, Suyin (played by Li Bingbing), discover that the bottom of the Mariana Trench is an illusion, concealing a deeper abyss of relatively warm water. The initial exploration meets with immediate disaster when the submersible is disabled in a Megalodon attack, leaving the crew of three trapped. Enter Jonas Taylor (played by Jason Statham), world-famous deep sea rescue expert washed up on the shores of Thailand after claiming to have seen a Megalodon in the Phillipine Trench five years previously. His reluctance to return from retirement is reversed when he learns that one of the trapped scientists is his ex-wife, Lori (played by Jessica McNamee). Meanwhile, Suyin mounts her own rescue mission and by the time Taylor arrives both her and Lori need saving from the Megaladon, a giant squid, and the general inhospitability of life at eleven thousand metres under the sea. A Megalodon that far down doesn’t present much of a threat to human beings, but the disruption caused by the penetration into the abyss brings one back to the research rig. After making mincemeat of the facility’s two resident whales, the Megalodon heads for Sanya Bay, in China (just south west of Hong Kong), and the trouble – and fun – really begins. Jon Turteltaub’s CGI is for the most part photorealistic and he avoids the pitfalls of portraying the shark as supernatural – as too big, too fast, or too clever. My sole concern with regard to suspension of disbelief was about the shark’s origin. The trench provides a convincing explanation for why it has remained unknown to humanity, but I’m not sure that a creature whose habitat was so far below the sea would be able to survive – let alone thrive – on the surface. Having said that, the sheer spectacle of Megalodon breaching was enough to submerge any further pseudoscientific speculation on my part.

There are disappointing deliveries from Statham and Bingbing and the romantic relationship that develops between Taylor and Suyin is childishly chaste, almost prudish. Statham still looks good in a swimsuit at fifty, however, and flaunts a jawline that puts Megalodon to shame so perhaps one shouldn’t ask for too much more. There are also times when the film comes close to sinking into sickly-sweet sentimentality – between Suyin and Minway and between Suyin’s eight year old daughter, Meiying (played by Shuya Sophia Cai), and everyone else – but the dangerous doses of saccharin are offset by a sage scattering of comedy, much of which succeeds in being genuinely funny without resort to parody. The most remarkable aspect of the narrative is a temporal structure that matches the shark – lean, mean, and fully fit for purpose. The plot performs a perfect balancing act, pausing here and there to avoid the feel of a mindless action thriller but pushing the story forward with every scene. The poised pacing facilitates some thematic evolution, with reflection on contemporary environmental issues. Suyin argues for capturing rather than killing the Megalodon, although she is quickly overruled when it turns its attention from whales to fishing boats. Minway expresses his regret at being forced to repeat the historical pattern of humanity’s impact on the natural world – discovery followed by destruction – and there is a neat intersection of conceptions of exploration, assimilation, accommodation, and extermination in Turteltaub’s cinematic framework. The Meg is the first big budget shark film since Deep Blue Sea and has, like its predecessor, been panned by critics. The former’s Tomatometer score at the time of writing is 50%, just under the latter’s 56%, so in the interests of full disclosure I should probably add that I would also have awarded Deep Blue Sea four stars. ****
Posted by Rafe McGregor