Into the Unknown: a Journey Through Science Fiction, curated by Patrick Gyger (Barbican) | review by Stephen Theaker 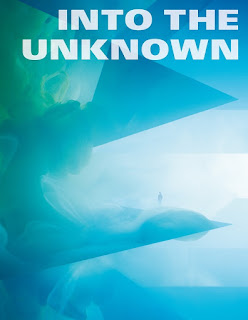 This exhibition, billed as “the genre-defining exhibition of art, design, film & literature”, began running at the Barbican on 3 June 2017 (the day the TQF co-editors and their families attended), and would remain open until 1 September 2017. It was announced in 2016, and I had been looking forward to it ever since, but in the event it was, despite some remarkable exhibits, a bit of a disappointment. Part of that can perhaps be laid at the tickets, which promised three parts, but only the first was the exhibition proper, and there wasn’t very much of it.

The items in the main section included books (not all classics, or valuable editions – it was peculiar to see books I own under glass), magazines, short films (including one written by an AI, the actors gamely trying to find the truth in its words), spectacular model space guns, spaceships, space stations and spacesuits – including John Hurt’s from Alien, which was amazing to see, though one might doubt its provenance seeing as no hole had been burnt in the faceplate!

The problem is that these were cramped into a very small space, so much so that we were told to carry our backpacks rather than wear them. It would have definitely have had more impact had the items been spaced out more – for example, few in our party even noticed the robot from Interstellar, which would have made a formidable exhibit on a plinth of its own, lurking in the shade of Twiki from Buck Rogers in the 25th Century and the showier robots from Lost in Space and I, Robot. Godzilla heads are only visible from a distance, and like many items can only be seen from one side.

The second part was a film, into which only a dozen or so people could enter at a time, leading to queues – odd for a booked event at which the numbers present during any given time slot should have been fairly predictable. The third part was a spinning robot shining a light that seems intended to create patterns, giving a sense of artificial intelligence. I spent most of that exhibit worrying about whether the children would tear the paper sheets that surrounded the robot. There was also a selection of sf video games like Half-Life 2, and music from people like Tangerine Dream, accessible to the public as well as those attending the exhibition.

“Genre-defining” is a big thing to ask of an exhibition. It was however a pleasant look through the nice collection of a wealthy chap, but one suspects that many visitors will have had quite interesting collections of their own, albeit gathered at rather less cost. It was definitely worth a look for those already in London, but we didn’t feel it had been worth the special trip we made to see it. Those who were unable to visit should note that the catalogue is an impressive hardback book, available from the Barbican’s online shop. ***
Posted by Stephen Theaker