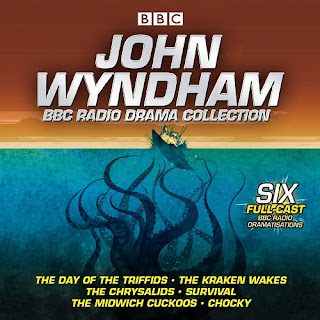 This marvellous audiobook collects five full-cast BBC adaptations of John Wyndham’s classic science fiction work – five novels, plus a short story – as well as Beware the Stare, a half-hour documentary from 1998. It’s a ten-hour journey into some catastrophes that are not at all as cosy as I remembered.

Giles Cooper’s chilling six-part adaptation of The Day of the Triffids dates from 1968, and is framed as a record of the events being made years after. Bill Masen found a triffid growing in his garden as a youngster, studied it, and got a job farming them. A triffid sting leaves him in hospital with bandaged eyes during a meteor shower that blinds everyone else. This leads of course to the scenes that inspired the beginnings of 28 Days Later and The Walking Dead, as he emerges blinking into a world gone mad. In this adaptation this sequence is particularly distressing, since we hear the wails of babies as he ruthlessly walks away from their ward. Outside the hospital he finds that people are killing their own children and committing suicide.

It seems odd that mere hours after discovering their blindness people would go to such extremes – wouldn’t you wait a little while to see if the effect wore off? And it’s very hard to like a hero who walks away from crying babies and starts breaking into people’s homes on day one. He meets up with a woman, and they make no effort at all to help other people: their plan – on the first day of the disaster! – is to leave London until everyone has died and all the bodies have finished rotting away. But they become more sympathetic as the story goes on, as the triffids escape from the farms, and as they meet other survivors who are even worse. It’s a very well done adaptation, its only flaw (one it shares with The Chrysalids) being some ear-curdling adult-for-child acting when a young girl joins their group.

At the end of the adaptation what seem to be a set of deleted scenes play out, which are interesting to hear, but it’s easy to miss the start of the next story, The Kraken Wakes. How there has never been a film of this classic novel, when we’re about to get a fifth version of The Body Snatchers, I don’t know. This ninety-minute adaptation is from 1998, and it charts the course of another slow invasion: lights are seen falling into the sea, ships start to go missing, and then, after attempts to blow up whatever’s in the water, coastal towns mysteriously lose their populations. The scenes in which our protagonists witness an attack on a seaside town is terrifying to listen to, the screams of those caught in the attackers’ clutches horribly realistic. Until the truth of it all becomes too obvious to deny, people ignore what’s happening, laugh at the very idea of it. It’s ironic that John Wyndham’s idea of a devastating alien attack proves to be something we’re actually doing to ourselves.

The Chrysalids is rather different to the other novels, in that it begins in the future, after what seems to be a nuclear disaster. Mutation is feared, and those born differently face execution or exile. Not all mutations are visible, though, and a group of children who can thought-speak to each other at a distance struggle to keep their secret, especially when a much more powerful telepath makes herself known. This 1981 adaptation would be fine were it not for the aforementioned adult-for-child acting.

Survival is from 1989, and seems to be from an anthology series. A spaceship full of would-be colonists goes off course, and we see how far they will go in order to stay alive. The ending is gloriously nasty. Doctor Who fans will be pleased to hear Brigadier Nicholas Courtney pop up briefly.

The two-part adaptation of The Midwich Cuckoos is from 2003, and is another highlight. It flips the premise of The Chrysalids: the psychic children of that story were the heroes, but here they are the villains, though that seems just to be a matter of perspective. Everyone in the village of Midwich falls asleep, and after a little while the women all realise that they are pregnant. The children, when born, are very strange, and take control of their parents. Whereas the film stuck with the children and their teacher, this version follows the brilliant Bill Nighy and his wife when they leave Midwich, and then return a few years later to see how strange things have got. Like The Kraken Wakes, this is a slow-moving disaster story, and it is all the worse for how natural it all feels.

Chocky is from 1998, and is the story of Matthew Gore, a boy whose imaginary friend is teaching him binary calculations and asking questions about space travel. Unlike some of the other stories, this features a child in the role of the child, and benefits accordingly. It’s Sacha Dhawan, from Iron Fist and An Adventure in Space and Time, who would have been about fifteen at the time.

The audiobook ends with the short documentary, produced to tie in with The Midwich Cuckoos. It’s interesting – and includes clips of other adaptations – though it raises as many questions as it answers: why did John Wyndham burn his diaries? And did the US science fiction magazines of the 1950s really demand the inclusion of explicit sex scenes?

This is an exceptionally good collection, showcasing both the work of a brilliant writer and the talent involved in BBC radio drama. Some of these have been available individually, so being able to get the entire collection for a single Audible token is great value for money. Highly recommended. *****
Posted by Stephen Theaker