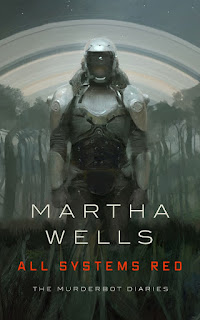 People are using wormholes to travel to distant planets, and since that can be a dangerous business their insurers tend to insist that the expeditions include a so-called murderbot (a SecUnit) to do any necessary killing. They also record every conversation for later data-mining. One of these robots is our protagonist, and since it has hacked the governor module that would normally keep it under control the explorers don’t realise how much danger they are in. Luckily for them, the murderbot prefers soap opera to grand guignol. Less luckily, someone or something else has tampered with their equipment and data. When a competing base on the other side of the world goes dark, the murderbot accompanies the scientists on a trip to investigate, while trying to deal with the social anxiety that inevitably results from spending time with people who at any moment could rumble its secrets and have it disassembled. They freak out enough even when seeing it has a humanoid face under its helmet. This is a short, very enjoyable book about an anti-hero who can take a lot of damage and keep on going, who almost despite itself starts putting others ahead of its own interests; a bit like Wolverine or Snake Plissken but with the insecurity that comes from its particular circumstances. Placing a character like that in a terribly dangerous scenario with ruthless villains on the loose and a bunch of decent scientists to protect makes for good reading. The fight scenes are very well worked, and so is the evolution of the robot’s relationships with its colleagues/leaseholders. I doubt this’ll be the last book I read about this robot. ****
Posted by Stephen Theaker