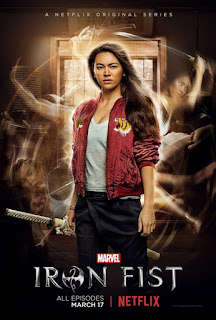 Joy (Jessica Stroup) and Ward Meachum (Tom Pelphrey) are the siblings who run the immense multinational Rand Corporation, which was founded by Wendell Rand (who died with his family in a plane crash) and their unpleasant father (David Wenham), who died of cancer. A problem presents itself: a homeless man (Finn Jones) turns up at their building, claiming to be Danny Rand, son of their father’s partner, and an old friend of theirs. If it is Danny Rand, he would own 51% of their company. At first they don’t believe him, to the extent that they throw him out without asking a handful of obvious questions that could have easily confirmed his identity.

However, it soon becomes clear that he is really Danny Rand, and here they have a stroke of good fortune: he’s a complete idiot who believes everything he is told, happily tells psychiatric doctors about his time in the mythical kingdom of K’un Lun, and is incapable of putting together the simplest clues as to what is really going on. Less fortunately for them, he begins to acquire capable and sensible allies: Colleen Wing (Jessica Henwick), a karate instructor who will help him fight, Claire Temple (Rosario Dawson, reprising her role from all the previous Netflix/Marvel shows), a nurse who will help him heal, and Jeri Hogarth (from Jessica Jones; Carrie-Anne Moss), a lawyer who will help him get his company back.

Very occasionally he uses the martial arts skills that he acquired during his absence (though he’s very bad at knocking people out), and even more rarely he uses his special power, a glowing fist that can punch through anything. Joy and Ward don’t seem that bright either, since Danny Rand doesn’t really care about money, owning a company, or running a company; he only gets mired in that stuff in order to establish his identity and reclaim his name.

And so we get a show that spends masses of its time worrying about which of the repellant Meachums or their rivals (including the manipulative Madame Gao, played by Wai Ching Ho) is truly in charge of their company, while the titular character scowls his way through every scene and scampers around like a silly puppy at their beck and call. Viewers know that he has had a difficult time of it – the plane crash and subsequent years of apparently abusive training have left him suffering from post-traumatic stress disorder – and he has not lived in the modern world, but it’s still hard to forgive his lack of regard for women’s boundaries in the early episodes (he breaks into the homes of both Joy and Colleen) and the way that he constantly acts like a colossal jerk. It’s hard to understand why Colleen Wing comes to like him so much, but thank goodness she does, because the programme would be much less watchable without her likeable and energetic presence. It picks up later as mysterious men Bakuto (Ramon Rodriguez) and Davos (Sacha Dawan) come to the fore, and with the latter there are even a few moments of much-needed comedy, but this still goes down as the least of the Netflix Marvel shows so far.

It was criticised before release by people who wished Danny had been played by an Asian actor. You can understand why they felt that way, but it would have been a completely different show: this is all about a rich white guy who is the first outsider to acquire the Iron Fist power, to the great resentment of those locals who thought it was their birthright. What harms the programme more is the actor’s apparent lack of martial arts skills. Season two could be better. It needs Danny to be a bit less one note in his reactions, it needs an antagonist who is in direct conflict with Danny rather than ambivalent towards him, and most importantly it needs much better fight scenes. The pace is no faster than season one of Daredevil, but in Daredevil the fights are worth the wait. In a show specifically about a martial arts master, the fight scenes need to be outstanding. ***
Posted by Stephen Theaker