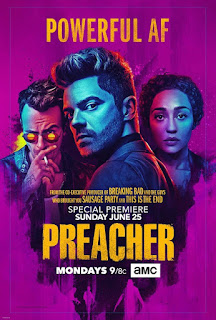 Jesse Custer (played by Dominic Cooper) used to be a preacher, albeit not a very good one. His life was turned upside-down, and not for the first time, when he gained the power of Genesis, a heavenly being. It had previously tried to join with Tom Cruise, with explosive results, but seems quite comfortable with Jesse. It gives him the power to command anyone, as long as they can hear him, and as long as they have a soul. By season two he has an uneasy romance with with passionate criminal Tulip O’Hare (Oscar nominee Ruth Negga) and an uneasy friendship with dissolute vampire Cassidy (Joseph Gilgun). (Church helper Emily from season one does not return.) God has wandered away from heaven, but he loves jazz music, so they come to New Orleans in search of him. Meanwhile, the Grail tries to get its teeth into Jesse Custer, the Saint of Killers is on his way, Cassidy has to learn a bit of responsibility, and poor old Eugene Root has to deal with Hitler (a brilliant Noah Taylor). It’s a season that features some of the most shocking scenes ever seen on television. Maybe it’s not quite up to the extremely high standards of season one, but it’s still a great show, and it looks like season three will be a corker, drawing on the comic’s very best issues. Stephen Theaker ****
Posted by Stephen Theaker