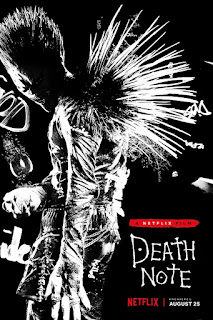 In this American adaptation of the Japanese saga, dropped by Warner Bros but then produced by Netflix, Light Turner – yes, that’s his name – is plying his trade, homework for cash, while watching the cheerleaders practice, when out of a cloudy sky falls a battered book with the words Death Note on the front cover. He picks it up, then gets himself punched in the face confronting some bullies. He gets punished for the homework service, the bullies go free, and in detention he has his first encounter with what we will learn is the death god Ryuk, in a scene where the shrieksome Nat Wolff as Light Turner makes you wonder if this is going to be a horror comedy. It’s not, or at least I don’t think it is meant to be, but then, once Ryuk has made his first entrance, it’s not very scary either. It’s more a thriller with supernatural elements. The chatty, persuasive, spiny-backed monster (voice by Willem Dafoe, body by Jason Liles) tells Light that if he writes a name in the book, that person will die. If he specifies how they will die (and it has to be physically possible – no sharks in toilets, he is told), that is how they will die. There are lots of other rules, and bit by bit the film tells us those that will be relevant to the plot. Ryuk tempts Light into using the book, and it’s an easy sell: those bullies are harassing a cheerleader, Mia (Margaret Qualley, from The Leftovers). Soon Light and Mia will become close, and start using the book, but you know she’s a bad influence because she’s smoking in her first scene, and as they expand their death noting it’s not long before L, trained since the age of six to be the world’s greatest detective, is on the hunt for them. L, easily the best character in the film, is played by Lakeith Stanfield, also great last year in Atlanta and Get Out. I wouldn’t have minded seeing a film just about him, and apparently there is a spin-off of the previous Japanese films about the equivalent character.

I haven’t seen the anime versions, or the live action Japanese films, or read the comics, but you would think that with so many previous versions to consider that the film-makers would have been able to get a pretty good idea of what worked and what didn’t before starting work on this one, which despite that ends up being pretty unremarkable. For one thing, Light is is a very unsympathetic lead character. The film was criticised by some for whitewashing, by casting a white actor in the lead, and maybe that played into my feelings when watching it. No one’s saying that when adapting a title from another country you must keep the setting and ethnicities of the characters exactly the same, and there’s certainly more diversity in this film than in the Japanese version, but when you cast a blonde white guy in an American remake of a Japanese film, it can feel like you are making a statement about the blonde white guy being more typically American than the alternatives. He certainly didn’t come across as the genius the film needed him to be.


What I did like about the film was how it opened out very quickly from what could have been a straightforward Final Destination kind of film to exploring the wider possibilities of the death note power, but I have to say I liked the Final Destination films much better. As well as vividly demonstrating perfectly the importance of good health and safety, they brim with suspense. There’s nothing in this film that comes close to the set pieces in those, though the conclusion has a crack at it. Ryuk is good company but you could replace him with a series of bombs without affecting the plot very much. It’s not a classic film, but it’s sweary and gory, and music is deployed very well throughout. It’s watchable enough to pass a couple of hours, and I could see a sequel being better, especially if it played up the horror. The part most likely to stick with me is the excellent advice of L’s right-hand man, Watari: “Sleep is key to strong thought.” Stephen Theaker **