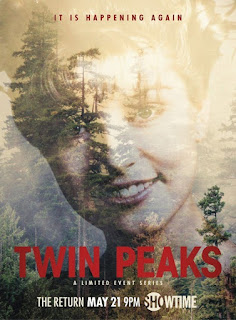 The original Twin Peaks was a remarkable programme, easily liked for its quirky characters in a lovable town, but utterly terrifying as that lovable town’s dark secrets bubbled to the surface. It was said to have lost its way after the revelation of Laura Palmer’s murder, but I don’t remember ever being anything less than desperate to watch the next episode. I remember talking about it in the school library with other fans, lending out my copy of The Diary of Laura Palmer. The film came after I had gone to university, and I was very unhappy when the promised follow-ups never appeared. (We didn’t have ww.boxofficemojo.com back then, so I had no idea that it had not been a financial success.) Like many who enjoyed the show, I was extremely excited to hear that a third season was on the way, with David Lynch writing and directing, and many of the original cast returning. My feelings while watching the revival varied from scene to scene. I never stopped being glad that the new episodes existed. I was glad that a television channel had given a genius and his clever colleagues the money, time and space to indulge himself. But it did sometimes feel like it was taking the mickey.

The return begins where the last show ended, with Agent Dale Cooper trapped in the Red Lodge, and his evil doppelganger at large outside. The details of the plot are often hard to follow (all part of the fun), but, essentially, Cooper gets out, with help from bizarre supernatural beings, and is damaged on the way, and thus takes the place of a second doppelganger, who was married with a child. As Dougie, he lives on instinct, speaks few words, is baffled by the world, shepherded by his wife, Janey-E Jones (Naomi Watts), and yet treated like a genius. (One might suspect that this is an allegory for how Lynch often feels.) This state of affairs carries on for much, much longer than most viewers will appreciate, even if Kyle McLachlan’s performance is superb. Far more enjoyable are the scenes involving FBI Deputy Director Gordon Cole (played by Lynch) and FBI Agent Albert Rosenfield (Miguel Ferrer), as they investigate murders, track down the evil Cooper doppelganger, visit mysterious locations, and introduce us to mythical Diane, to whom Dale would dictate his messages, played brilliantly by Laura Dern.


Not much of this happens in Twin Peaks itelf, and it often feels more like a spin-off from the original programme (like the one originally planned for Audrey Horne) than a sequel. The scenes that take place in Twin Peaks are reminiscent of Arrested Development season four, where characters appeared in their own storylines but rarely interacted, due to the production difficulties involved in getting them on set together. That’s understandable with the actors in this who died after production began – it’s wonderful that a way was found to include them – but even with other Twin Peaks characters it feels like all their scenes are with the same few people every time, or with no one.


Often the lack of background music, long scenes and earnest acting make it feel like a parody of bad, low-budget films like The Room – or are those scenes just plain bad? They often feature women who are shrill and hectoring. Women are generally not shown in a good light, and there is a great deal of violence towards them. Perhaps both of these things could be explained by this all drawing on the stuff of nightmares, but it wouldn’t be a surprise if many viewers stopped watching for that reason. Another group of viewers likely to be disappointed are those for whom the original was a quirky soap, the predecessor of shows like Northern Exposure and Gilmore Girls. There’s not a lot of that here, and it’s easy to understand why US channel Showtime almost had second thoughts about making it.


At times it is quite boring, at others nasty and unpleasant, and it’s not a lot like the original programme, and yet, overall, I loved it. It was genius, unmissable television. Those who loved the weirdness of the original, who adored the even weirder Fire Walk With Me, will find a lot of what they have been waiting for. Even if the rest had been a total disaster, the new episodes would have been justified just by the scenes in the black lodge before Cooper is released. That tree! And the flashback episode, surely a contender for greatest television episode of all time! At times it was literally necessary to remind myself to breathe, and I couldn’t let myself think about the programme at night. Stephen Theaker ****