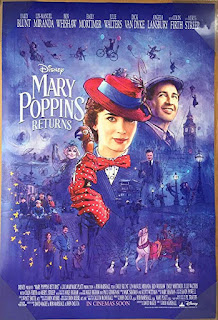 Over 50 years later, the magic returns in respectful sequel that celebrates positive thinking and the power of the imagination.

Since she floated down to London to help the Banks family in the 1964 film that bears her name, Mary Poppins has been an internationally beloved representation of patience, wisdom and imagination. Mary Poppins Returns, directed by Rob Marshall, stays true to the inventiveness of its predecessor, while presenting a more 21st century-relevant (i.e. economically-driven) story-worthy problem.

Mary Poppins Returns takes place in the mid-1930s, 25 years after the original story. Michael Banks (Ben Whishaw), one of Mary Poppins’s original charges, is now a widower raising his three children with some help from sister Jane (Emily Mortimer), another Poppins protégé. When Michael falls behind with payments on his family’s home, William Weatherall Wilkins (Colin Firth), the malicious CEO of Fidelity Fiduciary Bank, gives Michael a few days to pay the entire mortgage. Otherwise, the Banks lose the home.

While Michael and Jane attempt locate a possible inheritance, Mary (Emily Blunt) and Michael’s three children, often joined by Jack the lamplighter (Lin-Manuel Miranda), go on musical adventures, but also try to help Michael. Among their destinations are a bathtub portal, an animated world depicted on a porcelain bowl (listen for the clinking as they walk), and the shop of Topsy (Meryl Streep), Mary’s presumably Eastern European cousin who can fix anything except on second Wednesdays, when everything in her life goes upside down. Guess what day they visit her.

Emily Blunt does justice to the iconic nanny with her economy of movement, quiet confidence, and impressive vocals. As with the first Mary, this one is just as likely to remain silent as she is to dole out advice (spoken or musically) to children and adults.

Lin-Manuel Miranda’s Jack, with his Cockney accent and always-chipper mood, gives a nod to the effervescent chimney sweep Bert (Dick Van Dyke) of the original. Street lamps are not the only thing Jack lights up – from the time that he kicks off the film singing “(Underneath the) Lovely London Sky” (despite riding his bicycle through a gloomy cityscape) until the buoyant “Nowhere to Go But Up” at the end, Jack maintains a positive outlook.

The upbeat tunes that dominate this film seem designed to embed themselves in viewers’ heads… especially younger viewers. The toe-tapper “A Cover Is Not the Book” has several parables and even a (near) rap performed by Jack. In “Trip a Little Light Fantastic”, Jack and his fellow lamplighters, accompanied by Mary, do an atmospheric number that pays tribute to the chimney sweeps’ “Step in Time” in the original film. The most serious number is “A Conversation”, Michael’s heartrending message to his deceased wife.

With its abundance of inspirational quotes and didactic songs, Mary Poppins Returns, like its forebear, entertains and teaches. Here’s to Mary Poppins and her umbrella protecting us from rainy days for another 50 years. – Douglas J. Ogurek *****