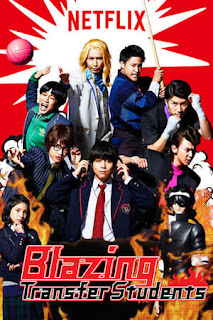 Seven students, coincidentally all named Kakeru, start at Tanebi School on the same day, and are thrown into the ring to fight each other. Played by the members of Johnny’s West, a Japanese boy band whose members range from twenty to thirty years of age, they are all distinct types. The trailer describes them as “the excessively zealous fighter”, “the unbelievably smart nerd” (who has very smart glasses), “the young wannabe samurai” (obsessed with old television dramas), “the incredibly average guy” (who seems to be a bit of a creep), “the hoodlum from a bygone era” (who has a magical quiff), “the ultimate crybaby” (who has a Moe haircut) and best of all “the appallingly vain narcissist”, though I’d descibe him more as a lover of beauty in all its forms. After a seven-way special moves brawl, they try to escape, but are recaptured by the other wacky students of this place. Hikari takes them to the principal to learn why they are here: to train as blazing transfer students, who go undercover, two or three at a time, in troubled schools and sort them out. Imagine a cross between 21 Jump Street and Scott Pilgrim Versus The World, with special effects comparable to The Sarah Jane Adventures. Did I mention that the principal, who assigns their missions, is a lifesize mannequin in the form of the lead character from the original manga? It’s posed for different shots, but is never seen moving, and it never ever stops being laugh out loud funny. It also tickled me when, in a later episode, the artist behind the original comic from the eighties turns up to declare he is unhappy with the television adaptation and brings his own replacement team! Other missions include things like a school where all the pupils turn into zombies at night and one whose female pupils have been kidnapping nice boys and keeping them in a cage, to find out what nice boys are like. It’s a shame Hikeru wasn’t directly involved in more of the missions, but it is after all a vehicle for the seven male pop stars. I remember borrowing a friend’s copy of the Doramu Encyclopaedia and being amazed to see how many live action Japanese fantasy programmes there were that I had never heard of. I’m glad Netflix are giving us the chance to check them out. (The Japanese title of this one is Honō no Tenkōsei REBORN.) If you ever wanted to see a programme where one man focuses a jet of wee through the magical quiff of the guy giving him a piggyback, or where two guys in a beauty contest battle it out with magic winks and a visible workman’s aroma, this is it. ***
Posted by Stephen Theaker