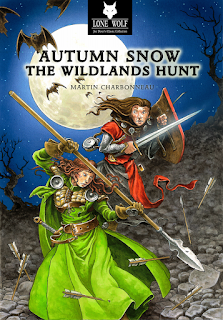 The Wildlands Hunt is the second instalment of the new Lone Wolf gamebook series, which began with The Pit of Darkness in 2017, and follows the adventures of New Order Kai Konor Autumn Snow. Like its predecessor, The Wildlands Hunt is crowdfunded, with progression from funding to delivery proceeding much quicker and smoother the second time around. The project was launched on 28 January 2017, received the required initial funding of €4000 the following day, received €15,000 within a fortnight, and the volume was published in October 2018. Megara Entertainment was founded in 2007 and director Mikaël Louys appears to have been transparent about the company’s financial situation throughout. In March this year, for example, Megara published a hardback collector’s edition of Grey Star the Wizard. This was the first in a short spin-off series – The World of Lone Wolf – that followed the adventures of Grey Star, a Shianti wizard. The four books were written by Ian Page, illustrated by Paul Bonner, and edited by Joe Dever, creator of Lone Wolf and Lone Wolf’s world, Magnamund. Grey Star the Wizard (1985) was succeeded by The Forbidden City (1985), Beyond the Nightmare Gate (1985) and War of the Wizards (1986), making 1985 the most prolific year for the franchise, with The World of Lone Wolf 1–3 published alongside Lone Wolf 4–6 (The Chasm of Doom, Shadow on the Sand and The Kingdoms of Terror). On the Kickstarter updates, Louys reveals that Megara published Grey Star the Wizard at a loss, selling a disappointing two hundred copies. He seems undeterred, however, and after revision of the production model, launched The Forbidden City project as Grey Star the Wizard was released. The campaign has reached €11,845, exceeding its €8000 goal, although the stated delivery date of December 2018 is likely overambitious. For those who have followed the vicissitudes of Lone Wolf publication (which I related in my reviews of Lone Wolf 21: Voyage of the Moonstone and Lone Wolf 29: The Storms of Chai), it will come as no surprise to hear that Megara are currently in the midst of financial problems. The Wildlands Hunt is printed in the same format as The Pit of Darkness (medium octavo hardback), retails at €40 (delivery included), and is only available from the Megara website (www.megara-entertainment.com).  I ordered my copy on 12 October (the transaction cost me a total of just under £37, but no doubt this will rise in direct proportion to Brexit chaos). On 12 November, I received an email from Louys stating that there had been a delay caused by issues with investors. The book arrived on 24 November, along with a free copy of the collector’s edition of Fabled Lands 1: The War-Torn Kingdom by Dave Morris and Jamie Thomson (first published in 1996; published by Megara in 2014). My assessment is that Megara are scrupulously honest, but that until the publishing uncertainty is resolved, buyers should be wary. On a related note, I must admit to not contributing to either Autumn Snow Kickstarter project – as much as I long for more Lone Wolf gamebooks, past experience has made me wary of paying any small presses upfront.

Like The Pit of Darkness, The Wildlands Hunt has been released in French and English and combines the literary expertise of Martin Charbonneau with the artistic expertise of Gary Chalk. The volume is a perfect companion to The Pit of Darkness, with another wonderful colour cover by Chalk, twenty new full-page black and white illustrations, and several smaller ones that I didn’t recognise from previous publications.  Chalk’s artwork is widely-praised for an instantly-recognisable style that foregrounds clear lines, the use of negative space, and deliberately disproportionate figures. His drawings are also incredibly expressive, as a quick comparison of the illustrations for sections 65, 140 and 318 reveals. The first depicts the Ragadorn city guard, three men oozing so much menace and hostility that the picture alone motivated my decision to avoid the encounter. The Red Mask slaver in 140 looks just as deadly and dangerous, but Chalk’s representation provides a subtle invitation to the player to take up combat. Finally, the stagecoach ticket-seller is depicted with consummate pathos, imprisoned behind the bars of his counter, lending a melancholy mood to what purports to be an occasion for celebration. In keeping with The Pit of Darkness, there is no colour map in The Wildlands Hunt (these have been a mainstay of the Lone Wolf series to date), but my parcel arrived with a separate map (in colour) of the city of Ragadorn (where the second part of the adventure takes place). While I appreciate the gesture from Megara, I thought it detracted from the high production values of the gamebook, a laminated A4 sheet (too big to be slipped inside the book) that is functional rather than artistic and also superfluous to play (I didn’t use it at all). My review of The Pit of Darkness was critical of the number of typos and formatting errors, but there are much fewer of the former and none of the latter in the second instalment of the series (in my gameplay, anyway). There are, however, occasionally unusual turns of phrase and I wonder if this is a consequence of translation from the original French. At times these can simply read a little awkwardly, but one instance seems to make a racial slur against a particular character – which, permissible though it might be in a fantasy world is unnecessarily provocative in the context of publication and incongruous with the humanism that pervades the franchise. (I have not read the French version, though, so it may well be the result of a loss in translation.)

I gave The Pit of Darkness high praise for its balance in terms of gaming: difficult but not impossible; solving the perennial problem of healing and endurance point recovery; and presenting progressively more challenging encounters. The second and third of these hold for The Wildlands Hunt, which adds two more welcome elements. First, the use of the Kai disciplines is perfectly pitched – they all prove useful somewhere and no one in particular is essential for completing the gamebook. Second, there is a clear game (although not narrative) structure: the adventure begins with Autumn Snow held prisoner on a pirate ship; she must then navigate the trials and tribulations of Ragadorn; finally, she ventures out into the Wildlands that separate Ragadorn from her homeland of Sommerlund. My only complaint with respect to the game is that I found it too easy. Granted, my version of Autumn Snow is now an Aspirant, able to use six rather than five Kai disciplines, but as she failed to accrue anything of great value in The Pit of Darkness, she isn’t particularly powerful. I have always equipped my various Kai characters – Lone Wolf, True Friend (in the New Order series), and now Autumn Snow – with a bow and this was especially useful in The Wildlands Hunt. On reflection, I wonder if it was too useful and that without it the Wildlands would have proved much more dangerous than they were in my gameplay. My main criticism of the gamebook is its narrative. Despite the exemplary game structure, the story itself fails to fit the overarching narrative initiated by The Pit of Darkness and to match the internal rigour of the various Lone Wolf series so far. The Pit of Darkness concluded with Autumn Snow losing her Kai mentor and discovering a Nadziranim (evil sorcerer) plot set to unfold in the Maakenmire swamp. The final section saw Autumn Snow on the island of Kirlu, headed for Misty Bay and thence to Sommerlund, where she would report to her Kai superiors in the hope of being dispatched on the mission to the Maakenmire. The title of the second adventure was revealed as Slaves of the Mire, which appeared to reference this mission. When the title was changed to The Wildlands Hunt, I assumed this would chart the journey of the mission from Sommerlund to the Maakenmire through the Wildlands. When I began playing The Wildlands Hunt, it seemed as if the slings and arrows of fortune had taken Autumn Snow off course and the hunt of the Wildlands would feature her as the hunted, attempting to reach Sommerlund by land rather than by sea, fleeing from enemies in Ragadorn. Instead, Autumn Snow is the hunter in the Wildlands, having teamed up with an new ally – Athania, captain of the Valkharim (personal guard to the Overlord of Ragadorn) – and pursuing an exciting but irresponsible digression from her duty to report to her Kai superiors. While in the Wildlands there is a further twist setting the whole campaign in a different direction, although the title of book three is (once again) Slaves of the Mire… so perhaps the overarching plot has not been lost after all. This sense of meandering over mission is replicated internally and while the whole game is fast-paced, much of the action seems incidental or supplementary. This is the first gamebook set in Dever’s Magnamund that has, in consequence of his untimely death in November 2016, been published without his guiding hand. Dever’s influence as a master gamer and accomplished storyteller defied detection, but is revealed in its absence – the lack of the economy, artifice and vision that have underpinned all of the previous gamebooks, including The Pit of Darkness. I concluded my review of the latter by stating that the series could be the best addition to Magnamund since the Magnakai campaign ended in 1988, but I fear that it has, like Autumn Snow herself, lost direction.
Posted by Rafe McGregor