The Whispering Swarm by Michael Moorcock | review by Stephen Theaker 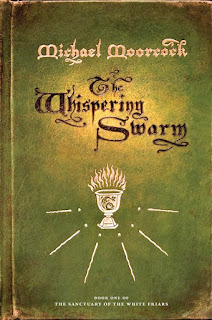 This book (Tor Books ebook, 7569ll) tells the story of Michael Moorcock, a hard-working writer of fantasy, science fiction and literary fiction plagued by the noise of a mysterious swarm. As a teenager, already at work in publishing, Moorcock meets Friar Isidore, who takes him to Alsacia, a magical Sanctuary with connections to all time and space by way of the moonbeam roads. There he meets people like Dick Turpin, Jim Bowie and Buffalo Bill.

At first he thinks them all actors on a film set, and later he comes to think the whole experience must have been a dream, but then comes the whispering, beginning shortly after the birth of his children, at which point it is but the “faintest of distant murmurings”, growing into “a torrent of unfamiliar, whispering voices”, and later becoming so unbearable that he can “barely ignore it for seconds at a time”.

That noise abates only in Alsacia, so he decides to stay there. He eventually becomes friends with the four musketeers and Prince Rupert of the Rhine, and thence involved in the war between the Roundheads and the Cavaliers. Drawn into a desperate plot to save King Charles from Oliver Cromwell and the scaffold, Moorcock must balance principle, friendship and his own responsibilities, choosing to help his new comrades though they must surely fail.

His story is told in the first person, and the reader may find themselves wondering how much credit these adventures are owed. The whispering begins when he has been “worrying what was best for the baby, where we should move and so on”, and much of his time in Alsacia is spent romantically with Moll Midnight, the inspiration for his most popular historical fantasies, while his wife and children believe him to be recuperating at a retreat.

Moorcock married young, to Helena, and they had children when young, and though his love for those children isn’t in question it doesn’t feel like he was ready to have them, and the character’s justifications for his absences fall flat throughout. At times it feels like the whole thing is a tall tale told to his children to explain away the times when he abandoned them, a fanciful excuse for a mundane affair.

He takes them to the cinema and the roof garden of Derry and Toms, but isn’t always there for everyday life. He comes across pretty badly. He takes lots of drugs (“where the coke and the speed met the mary jane and the wine my poor, puny little ego decided that promises were negotiable”), decries “unhappy women who eroticised inequality”, and at times becomes “briefly, a roaring monster with my friends or Helena”.

It is easier to cheer on his successes in publishing, from Tarzan Adventures and Sexton Blake Library to New Worlds, Elric, Jerry Cornelius and American success, “going instantly from work-for-hire hack to literary novelist”. He explains the two strands of his writing career thus: the fantasies are paperbacks and take three days to write, while the literary books appear in hardcover, are reviewed by the mainstream press, and take ten days to write.

His encounters with writers, editors and publishers make the book unmissable for publishing geeks and fans of the new wave, whatever its merits as a novel. He has a “desultory correspondence” with William Burroughs, trusts Barrington J. Bayley with the secret of Alsacia, and goes to the pub with Harry Harrison, Ted Carnell and John Wyndham. He helps “barmy, brilliant, treacherous old Phil” K. Dick get a publishing deal with Jonathan Cape.

E.C. Tubb tries to get off with Moorcock’s mum at a party. John Brunner gets it in the neck – “I tried to tell him he irritated people” – but gets credit for writing “with tremendous brio”. Other names are somewhat familiar, like Jack Allard, Jack Slade and Rex Fisch, though it’s worth remembering that the book tells us: “All of the characters ... are either products of the author’s imagination or are used fictitiously.”

The narrative is straightforward and linear, so it’s not a difficult book, but it is peculiar. Like The Coming of the Terraphiles it may divide its readership. The autobiographical elements will fascinate fans, but if the book weren’t stretched out to fit those facts it might have felt a bit tighter and less repetitive. Bored readers should skip to chapter forty-one before giving up.

That’s when the book springs to life, with the mission to save King Charles. Moorcock, Rupert and the musketeers sneak into Whitehall with an unwitting impersonator, then try to escape down the frozen Thames at night while hunted by Cromwell’s men. Like his fictional equivalent, our Moorcock has few equals when writing adventure tales, and the last forty thousand words here comprise one of his best. ****

This review originally appeared in Interzone #258.
Posted by Stephen Theaker