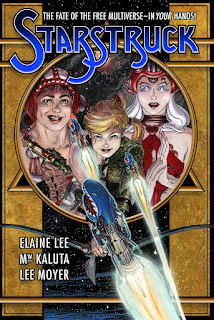 Reviewing Starstruck is difficult, since I barely understood a word of what was going on. In that sense, as well as in the detailed art, lettering and beautiful colours, it reminded me of reading French graphic novels – in French. There are people, in space. A ruler, who has a son and daughter who fight. A girl becomes an Amazon and as part of her initiation must battle some half-naked trolls. A psychic little girl climbs into an aquarium exhibit to communicate with the psychic aquatic life forms on display, sending her talent into overdrive, and when she’s older is placed with a fraudulent society of nuns. There’s a lot more going on, and a lot to take in, and I failed at that. Any individual page of it is glorious, and as a whole it’s admirable if baffling. Text pages at the end reveal that it’s all a prequel to a stage play, which helped me to understand it a little better: if I’d read it with a better idea of which characters were the protagonists, and what I was supposed to be rooting for, I would probably have enjoyed it more. And in a print edition, I might have realised sooner from flicking through that there was an extensive glossary; that would have helped too. New readers might be better off starting two hundred and thirty-eight pages in, with the stories of young Brucilla in the Galactic Girl Guides, since they are easier to follow and provide a more straightforward introduction to this universe. Overall, I enjoyed it, I think, but I started reading it in November 2013, and finished it in November 2017, which tells its own story. I would only recommend it if it sounds like something you’d really dig, if you like spending lots on time on each page of a comic, and plan to read it in print or on a tablet with a big screen. Having said that, its fans must have been delighted to have the whole saga collected in one book. ***
Posted by Stephen Theaker