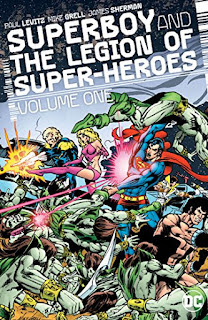 The Silver Age Superboy has already been visiting the Legion of Super-Heroes for a while by the time this book begins. It may have only been a year or two for him, but from the Legion’s point of view he’s been visiting since 2959 and now it’s 2978. It’s explained that anti-aging treatments in the thirtieth century extend lifespans and youthfulness, so the Legion still appear to be in their early twenties. Sensibly, Superboy undergoes super-hypnosis before returning to the twentieth century, to avoid interfering with the timeline, though this means, tragically, that he forgets Supergirl every time, and goes back to believing himself the last survivor of Krypton. Originally founded by Cosmic Boy, Saturn Girl and Lightning Lad, the Legion of Super-Heroes has a lot of other members by this point, including Brainiac 5, Phantom Girl, Chameleon Boy, Dream Girl, Mon-El, Shadow Lass, Wildfire, Dawnstar, Princess Projectra, Timber Wolf and, my favourite, Matter-Eater Lad, though he doesn’t play a big role in this book. This volume runs from issue 234 to 240, but the Legion had joined the title of the comic much earlier, with issue 197, while writer Paul Levitz had come on board with issue 225; presumably this volume starts where it does because the previous issues were collected in volume 13 of the expensive Archives collections. It works fine: it helps that it begins with a story from DC Super Stars #17, telling the story of the Legion’s founding. Despite the promise of the sales description, the book does not include issue 238 (a reprint of earlier adventures), only its cover. It does however include the All-New Collectors’ Edition C-55, an extra-length issue featuring the marriage of Saturn Girl and Lightning Lad, in a future derailed by the Time Trapper, not that anyone believes Superboy when he tells them. An important story, it leads to them leaving the Legion, per the rules. It’s hard to review something that’s so precisely what I’m after in a comic that it dissolves my critical senses. It’s not the Legion at its peak, but it’s building up to it, and if the actual plots (e.g. four legionnaires are combined into one composite monster) are not always top notch, the characterisation and the groovy seventies costumes are getting there. Some great names contribute, as well as those on the cover, including Gerry Conway, Jim Starlin, Walt Simonson and Howard Chaykin. And masses of superheroes in space adventures: what could be better? I should say though that I bought it for £3 in a Comixology sale. If I had paid the current price of £25 for it on Comixology, or even worse the current Amazon prices of £32 for the Kindle edition and £45 for the hardback, I might have been significantly less happy with it. ****
Posted by Stephen Theaker