Godzilla: Planet of the Monsters, by Gen Urobuchi (Netflix) | review by Stephen Theaker 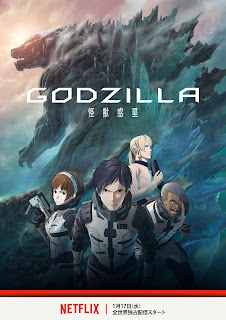 After half of century of all out attacks, humanity and its alien allies definitively lose the battle against the giant monsters, and the only option remaining is to flee the planet. It takes twenty years in space to reach a potential new home, but an attempt to land on that planet ends in disaster. A return to Earth becomes the least terrible option. One problem is that they have travelled very quickly back and forth, and so time dilation means that thousands of years have passed on Earth in their absence. An even worse problem is that Godzilla – or at least a godzilla, they reason – is still alive, and the planet’s ecology has reshaped itself around him. If humanity wants to recapture Earth, Godzilla will have to go. Captain Haruo Sakaki has a plan to take down the monster, but he’s less than fresh from a spell in the brig and doesn’t yet have the trust of the six hundred lives sent to carry out the mission. Godzilla’s toughness is revealed in this film to be thanks to a personal forcefield, and they have to destroy the organ that generates it if any lasting damage is to be done.

A new Godzilla film! Netflix was treating this as episode one of a series, but it did get a cinema release in Japan so I reviewed it on its own as a film without waiting for the two other planned films (or feature-length episodes if one prefers) to be released. Either way, it was very exciting to get to watch a Godzilla film so soon after its Japanese release. It’s often years before they are released in the UK, and even then it is often in terribly dubbed versions with a bare minimum of foley work. Not this time: Netflix present it with both English and Japanese audio, and with English and Japanese subtitles. (Foreign-language subtitles are fantastic for learners of foreign languages.) I watched it in English with English subtitles, which could be a bit odd, because they were often quite different. There are different constrictions for each – the dub tries to match the mouth movements of the characters, while the subtitles must be short enough to be read quite quickly – but they seem to have been produced independently. For example Godzilla is usually a he in the dub, but an it in the subtitles, while on Earth, examining a plant, a character is told in the dub that no one knows what will happen if his suit is torn, while the subtitles say outright that he will die. Trying to triangulate the Japanese meaning from these two slightly different translations provided an extra level of interest.

It felt to me like there were strong echoes of Mass Effect in the new Star Trek film trilogy and Star Trek: Discovery, and at times this feels rather like Mass Effect versus Godzilla, because of the design of the spaceships, suits and mobile turrets. The animation looks really good, although the ratio of action to conversation does make it feel more like television than a film. Godzilla seems a little bit stuck for things to do now that he rules the world, with no buildings to trample or power lines to burst through, but he is huge, menacingly slow and so craggy that it’s almost as if he has fossilised during the thousands of years the humans have been away. He has an amazing new (I think) tail attack which is supremely destructive. The film has many striking scenes, but one in particular struck home: the despair when the crew realises that Godzilla is still alive. Even though we know from the title that he will be, we really share their dismay. Overall: highly enjoyable, with a tip-top ending. Bring on films two and three. ***
Posted by Stephen Theaker