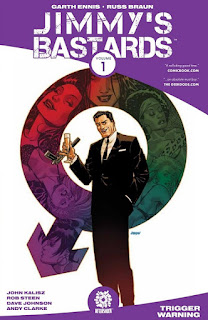 Jimmy Regent is MI6’s number one man, if we can trust the word of the terrorist on this book’s first page. Regent is a deadly shot with Dan Dare eyebrows and a fine line in double entendres. As his new partner Nancy McEwan discovers, though, he’s not quite the git you might expect. He’s so exceptional with women that he can tell if they aren’t interested, so he’s not a sleaze, and he fights to defend a parliamentary democracy because he believes in the notion of social progress. McEwan wonders if it’s more that he gets to shoot whoever he likes, drive far too fast, and “have sex with beautiful morons”, but he says those are just the fringe benefits. However, although he may have treated women well while he was with them, he didn’t stay with them long, and the consequences of a lifetime of love affairs and one-night stands are going to catch up with him.

Aftershock is a new publisher to me, but the list of other titles at the back of the book includes creators like Paul Jenkins and Mark Waid, so hopefully they’ll be around for a while. This volume collects issues 1 to 5 of the ongoing title, and the story ends on a cliffhanger, which some readers may find disappointing in a short book that’s going for about fourteen pounds in the UK. The title is also a clue that this will not be for everyone, since the very idea of triggering is treated as a bit of a joke throughout, and similarly the phrase “safe space” seems to be used in an odd way, as if it’s been mixed up with “happy place” – e.g. Jimmy tells one enemy who is trying to set him off that he doesn’t “have a safe space”, but of course for someone like Jimmy Regent, a white, male killing machine, everywhere is a fairly safe space, even when bullets are flying!


Nevertheless, I enjoyed it very much. It’s rather like Archer, if Archer was British, intelligent, and not such a dinosaur. Or indeed like James Bond, if Bond had a much more colourful rogues’ gallery. It may not yet have reached the heights of The Boys or Sixpack and Dogwielder, but it definitely made me chuckle, and I’ll be reading it to the end. Stephen Theaker ****