Atomic Robo and the Ring of Fire, by Brian Clevinger and Scott Wegener (Tesladyne) | review by Stephen Theaker 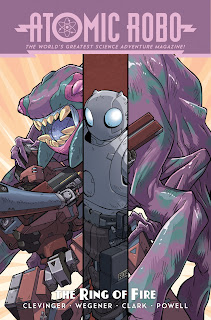 The tenth volume in the Atomic Robo series is back in the present day, or at least 2015, with the robot hero out of action and his buddies scattered. His adventures in the Wild West (see Atomic Robo and the Knights of the Golden Circle) left him out of power, without a body, and time-travelling the long way round, while the Tesladyne Organisation has been turned into Task Force ULTRA, a nefarious governmental agency. In this book ULTRA decides that the fight against the giant Japanese monsters known as biomegas is too important to be left to Science Team Super Five, while escapees from Tesladyne’s Venezuelan branch try to revive Atomic Robo before it is too late. As the biggest biomegas to date attack, people are going to have to learn to work together, and Atomic Robo will have to go into space.

In an afterword the writer describes this book as a cross between the Jason Bourne films and Pacific Rim, which seems fair; an alternative comparison might be Hellboy meets Neon Genesis Evangelion. Unusually for a long-running comic, Atomic Robo has featured the same writer and artist since the beginning, and it makes for a consistent and reliably entertaining series. The art always looks good, looking not unlike a series of animation cels, and if it’s not always immediately obvious what’s going on, that’s because (again, like Hellboy) the art here needs to be read, not just the words. I first started reading this title because it was one of the few books of interest on the ComiXology iPad app in its early days, and even though Marvel, Dark Horse and DC have since joined the party it continues to hold its ground. A good book, well worth reading. ***
Posted by Stephen Theaker