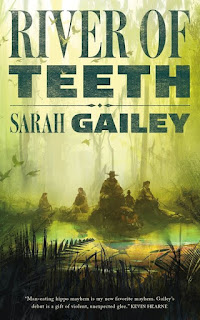 In March 1857 Albert Broussard proposed the Hippo Act, which would bring hippopotamuses into the United States to be raised for meat. Hippo ranches began to open in August of that year, and by November the Mississippi river was being dammed to create extra marshes for all the hippos to live in. This area was known as the Harriet. Unfortunately, by January the following year hippos were on the loose, ranching in the Harriet became much more difficult, and in time the area came to be dominated by criminals and cutthroats. Nevertheless, pansexual Blackpudlian Winslow Remington Houndstooth tried real hard to get a ranch going, and he was well on the way when malice struck. Some time later, he’s accepting a mission from the federal government. They want the feral hippos cleared out of the Harriet. He gathers a team: heavily pregnant contract killer Adelia Reyes, explosives expert Hero, meteor-hammer wielding Regina “Archie” Archimbault (and her boy assistant Neville), and fastest gun in the West Calhoun Hotchkiss. The government expects them to catch the feral hippos one by one and escort them off the territory. Houndstooth has a rather quicker method in mind, and he’s also hoping to squeeze in some revenge along the way. One problem they’ll face is that the local crime boss rather likes having the wild hippos around, since they keep civilisation out of the area, making it perfect for his needs, and give him a convenient way of disposing of his enemies.

This violent novella feels like a men (and women and Hero) on a mission story, but almost as soon as the team is put together, it begins to fall apart. There’s nothing wrong with subverting expectations, but it does feel unsatisfying. The villain’s plan is hard to understand – he seems to be caught unawares by the completely predictable consequences of his actions – and for the most part the feral hippos function quite similarly to piranha fish, swarming upon anyone they catch in the water. It becomes more interesting on the occasions when individual hippos step into the limelight. It’s got a good cover and a high concept, and that’ll be enough to carry a lot of readers through the book quite happily, but for others it’ll probably feel a bit thin. I found the characters likeable and interesting, especially Houndstooth, Archie, and the enigmatic Hero, whose preferred pronoun is they. The book doesn’t always handle this well: in a sentence like “Hero had grinned and gone back to work, and Archie had caught Houndstooth beaming at them” the reader has no way of knowing whether Houndstooth is beaming only at Hero, which would have romantic implications, or at both Archie and Hero, which would just be jolly. ***
Posted by Stephen Theaker