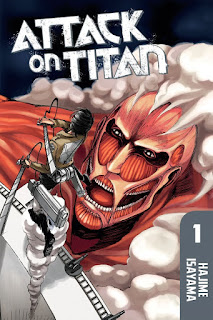 For the last hundred years, the world’s last surviving humans (so far as anyone knows) have lived safely in towns protected by a series of concentric walls, built so long ago that a religion has declared them the work of their god. The walls are tall enough to keep out the giants that have devoured the rest of humanity, but smaller towns are used to focus the titans’ attacks in predictable locations. Only the Survey Corps venture outside, in hope of finding a way to reclaim the world from the titans.

Eren Yeager (who will later develop a dramatically interesting skill), Mikasa Ackerman (who will become an awesome fighter) and Armin Arlert (whose strength lies in his brains) are three children, very close pals, who live in Shinganshina, one of the districts used as titan bait. And they are there when a new type of titan takes that bait: a colossal, intelligent titan who can see over the wall and kicks a hole open for its smaller friends to pile through. This leads to trauma for the three friends, and sets them on a path to the Survey Corps.

Slightly disappointingly, this long-running manga series is not set on Titan, so far as we can tell — Attack on the Titans might have been a more descriptive title. It seems to be set in Europe, going by the names of the children’s future colleagues in the Survey Corps (Jean, Annie, Bertolt, Marco, Reiner, etc), while Mikasa is the only living human of Asian appearance, making this a Japanese property Hollywood could adapt without getting into trouble for whitewashing. Although in theory this is a review of the first book, I’d read the first five volumes before writing it, and by the time this review is published there’s every chance I’ll have read all twenty-two volumes from the Humble Bundle. It’s extremely compelling, and a very quick read. I want to know what happens, where the titans came from, and what was in the secret basement of Eren’s mysterious father?

From page to page it wasn’t always clear to me what was happening, but that may be just because the visual grammar of manga is still pretty new to me, and I didn’t understand what kind of sounds the sound effects were supposed to represent – e.g. whether they were alarms, or a howling from the titans. Frequent recaps, information pages, and character introductions at the start of each book soon caught me up.

What makes the books so uncanny is that the naked titans have such gormless faces, a genius touch which makes it all the more frightening when they chomp on human beings. They are genuinely weird and disruptive. They don’t even digest us, they just seem to do it for fun! Rather like The Walking Dead, the series makes the oppressive sense of danger and frequent deaths of favourite characters bearable by frequently providing the cathartic slaughter of many enemies. Stephen Theaker ****
Posted by Stephen Theaker