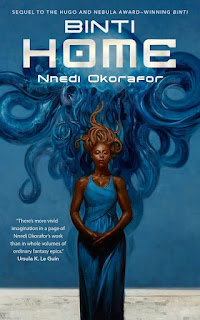 To be the first from your family to go to university is a curious experience, and, although Binti’s family is exceptionally talented, she is the first of the whole Himba tribe to attend a very special university: it’s on another planet. She’s made friends there with Okwu, a Meduse who was present at an event in the first book that left Binti badly traumatised – and, more positively, left her with alien head tentacles that wave around when she gets mad instead of braids. A year later, she is still getting used to those, to everything, and, even though she’s a dab hand at using maths to calm herself down, she decides to return home during the holidays, to Earth, to go on a traditional pilgrimage and sort herself out. When she gets there, there’ll be some comfort, some pain, and a new, unexpected and revelatory adventure. Binti is a fascinating character with a fascinating background who is living a fascinating life, and what more do you need for a great book? Though this is the middle story in a trilogy, and at the end things are set up for the third book rather than concluded, there is plenty going on. It is easy to sympathise with her feelings about it all. It’s a book with lots of fun ideas, like spaceships that are giant pregnant fish, and when Binti dances she can “manifest mathematical current within me, harmonising it with my muscles, skin, sinew, and bones”. However, she’s forbidden from dancing, from going in the water, from being seen in public without otjize, the happiness of returning home tempered, as it is for so many people, by the need to fit back into the metaphorical cocoon. An old friend, Dele, tells her sadly why he doesn’t want to hang with her while she’s back: “You’re too complex.” But as she comes to realise, “Change was my destiny.”

Note that the Kindle edition can only be downloaded on a limited number of devices, which seems odd for a DRM-free title. We ran out quickly, because everyone in the family wanted it on their Kindles. ****
Posted by Stephen Theaker