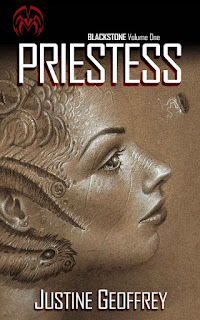 My first taste of Cthulhu erotica, and I wasn’t left with a shadow over Innsmouth, if you know what I mean. My Dunwich was not fully horrored. The thing remained on the doorstep. Doom did not come to Sarnath. This 2013 ebook brings together four previously published titles: Anicka and Kamil, Red Monolith Frenzy, Yvette’s Interview and Green Fever Dream. It starts with a dedication to “Ramsey Campbell, the first man to render my veils” (sic). Anicka, “teen witch of Stregoicavar and High Priestess of the Black Stone”, is trying to summon Daoloth, from Campbell’s story The Render of the Veils, and she goes about that by having sex with her brother and anyone else she can lay her hands (and inhumanly long tongue) on. Favourite phrase here: “Daoloth activates your hyper-chakras”! The Render puts her on the trail of Justine herself, who might become the next priestess, and does become the protagonist for the rest of the book. The sex is usually gross but consensual, except when Justine breaks out “the Triple Word of Power”; the descriptions of unfortunate people like “the pinheaded mongrel freak” are much more offputting. The dialogue all appears in italics rather than within speech marks, which is a bit distancing, and a lot of apostrophes are missing, which is not at all sexy. The synonyms used for relevant body parts (“dripping vacancy”, “orgone-sheathed cockmeat”) can be quite amusing. Not my kind of thing, but I’m glad I gave it a try, and people in the market for Lovecraftian erotica may well find that it calls their Cthulhu. Stephen Theaker **
Posted by Stephen Theaker