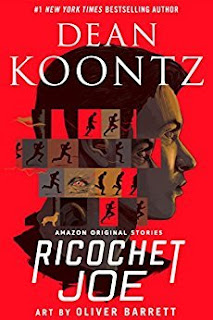 Joe lives in a small town called Little City, where he attends Little Junior College, in hopes of one day becoming “an English teacher or an advertising copywriter, or maybe a destitute novelist”. While volunteering for litter-picking in the park and considering whether to ask Portia on a date, he is seized with the urge to say “Corvette!” and to then run off towards one. When he touches the car he shouts “But stop!” and then carries on to that, and thus from one clue to the next till he gets to the source of the trouble. Hence the nickname, Ricochet Joe. It’s a funny idea, and one with obvious potential for television or film, but as a book this would seem a little old-fashioned were it not a Kindle in Motion title. The plot, the writing style, the way Joe talks about Portia (and “her delightfully distracting presence”) make it feel like something from the fifties or sixties, like one of Robert Heinlein’s more fantastical stories. But the Kindle in Motion elements make it feel very modern, Oliver Barrett’s art brought to striking life by Belief Agency. The only downside is that having those media elements enabled also fixes the background colour of regular pages to a grubby white. Worth a download, if only for the novelty of the moving pictures. ***
Posted by Stephen Theaker