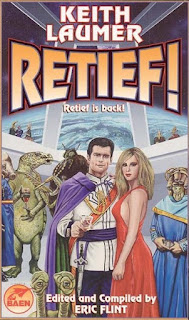 Retief, a junior member on various ambassadorial teams, clears up the messes of his incompetent superiors with a combination of brains and fists. The stories in this 2002 collection tend to be action-driven comedies, cynical reflections on the madness of the world and what a good man with two good fists could do to sort things out. There’s a very American impatience here with the limitations of diplomacy. Stories of competent men fighting their way out of difficult situations can be brilliant – many Jack Vance books, like the Demon Princes series, fall into this category. But Retief’s world is flimsy, his enemies paper cut-outs, and he tears through them as if the paper in question was single-ply tissue. He is stronger, more intelligent and more sensible than everyone he meets. His opponents are fat, effete and in some cases literally lightweight. A typical story sees Retief visit a world where the workers have overthrown the technological elite, with theoretically hilarious consequences. These stories may well have been based on actual events Keith Laumer himself had witnessed during his foreign postings, but, as written here, it comes across as extremely condescending to the working class. Women tend to be either strict secretaries, or very literal rewards for a good day’s work (with “very fat watchamacallits”). They are very rarely involved in the action, and often entirely absent from stories. The exception to the rule goes by the Bond-esque name of Miss Braswell. None of which is to say that this was entirely unenjoyable. In an undemanding way it’s okay, and it’s the kind of goofball sf I like to try writing myself. But the stories left no impression on me – and not for the first time, since according to my list of books read I’d already read some of them in a previous Retief collection, Envoy to New Worlds. None raised a flash of recollection. The most enjoyable section of the book was the complete novel included, Retief’s War, where an offworlder is encouraging the formation of a police state on a world where robots have evolved to live in anarchy. ***
Posted by Stephen Theaker