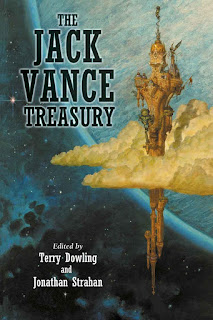 This was my favourite book I read in 2017, and maybe my favourite book ever. Edited by Terry Dowling and Jonathan Strahan, this collection of short stories and novellas was originally published as an expensive six hundred page hardback in 2006, and unfortunately the ebook isn’t generally available in the United Kingdom, but I was able to acquire it in a Subterranean Press Humble Bundle (every one of which has been an essential purchase). It contains several of my favourite stories of all time, for example “The Moon Moth”, about the hunt for a murderer on a world where everyone wears masks and speech must be accompanied by the appropriate musical instrument; “The Dragon Masters”, where Joaz Banbeck of Aerlith must lead the fight when aliens return to Banbeck Vale; or “The Overworld”, where Cugel the Clever encounters a village of people surrounded by filth but delighted to live in such luxury. Though I had read many of the stories before, either in short story collections or fix-up novels, it was a sheer treat to read them again, and there were many interesting stories with which I was not familiar, such as “The New Prime”, “Sail” and “The Men Return”, a very strange tale of a world where causality had gone away. The language is always a delight: stories begin with lines like “The archveult Xexamedes, digging gentian roots in Were Wood, became warm with exhertion” (“Morreion”) and are full of new vocabulary. Its weakness is that there are not a lot of female protagonists, and the supporting female characters can be caricaturishly simpering. “The Mitr” is an exception, the terribly sad story of a shipwrecked young woman, which reads like it could have been written yesterday. There are eighteen stories in all, each with an afterword extracted by the editors from Vance’s writings about his work. These don’t always comment directly on the story itself, but always add to our understanding of his work. The afterword to “The Dragon Masters”, for example, quotes him considering in 1977 the science behind the worlds of Rigel in the Demon Princes, which might surprise those who think of him primarily as a fantasist. You may not be able to buy this book. If you can, I recommend doing so! If not, seek out these stories in whatever editions are available in your country. *****
Posted by Stephen Theaker