The Galaxy Game by Karen Lord | review by Stephen Theaker 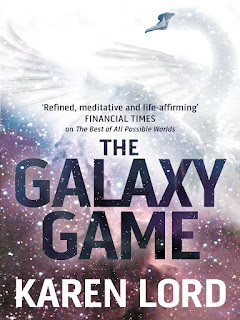 Rafi Abowen Delarua, Moo to his friends, also known as Rafidelarua, lives on the planet Cygnus Beta. For the last year he has attended the Tlaxce National Lyceum, and he’s getting bored, even though it’s a school for training “rogue and random psi gifted” to use their powers wisely. He is only fourteen when the book begins, but everyone is worried about him: his notorious father was immensely powerful, and did not use his powers for good.

Staff at the Lyceum leverage Rafi’s interest in the sport of wallrunning to persuade him to wear a cap, which will let them monitor the development of his powers more closely. The results are worrying: his psi powers manifest when he dreams about sex, and the dreams come with “a truly astonishing amount of fear”. He sneaks away from school over the weekend, and heads offworld, to the planet Punartam, where he’ll wallrun for shady Baranngaithe.

The galactic background to all of this is that the planet Sadira was devastated by a surprise biological attack, leaving “its biosphere locked in toxic regeneration for centuries to come” and its people scattered. Old Sadira had been the “leader of the galaxy… or at least policeman and judge and occasional executioner”, in part thanks to the psychic abilities of its people. Their absence from galactic affairs leaves a power vacuum and opportunities for the ruthless.

The government of New Sadira is desperate to bring female survivors to their new world. As a result “Sadiri women are now the galaxy’s rarest and most valuable commodity”, whether they like it or not, including those in a community of Sadiri recently established on Cygnus Beta. Meanwhile, Terra is out there, until now cut off from all these shenanigans, to allow us time to reach full maturity. The myths claim that endangered branches of humanity were brought long ago from Earth to Cygnus Beta to thrive in safety.

This was a disappointing book, for reasons that are a bit difficult to explain: it has what should be a satisfying array of mysteries, interplanetary politics, future sports, and interesting societal structures. Being lost for the first tenth of it didn’t help. The prologue is five thousand words long, a flood of information that simply serves to obscure the book’s main plot: a boy who leaves his home planet to play sports just as the galaxy gets crazy; it’s like the beginning of the Alan Smithee Dune, if each planet had names in three different languages.

That’s not the only aspect of the book that felt unnecessarily obfuscatory and foggy. For example, certain passages about a minor supporting character, Ntenman, and only him, are in the first person. The novel explains itself as a compilation of information recovered from datachips, audioplugs, data vaults and filigree, so perhaps the in-story explanation is there, but why him and no one else? It leads to the confusing assumption that he will be much more important to the plot than he really is.

Stories of future sports can be thrilling – they feature for example in Ben Bova’s The Duelling Machine and Jack Vance’s Trullion: Alastor 2262 – but wallrunning doesn’t sound particularly compelling. Two teams of players must run from the bottom of a wall to the top, guided by a strategist’s signals, conveyed through grav-bands on their wrists. Rafi plays as a booby, a deliberately useless player who lets everyone else practise how to handle team-mates’ mistakes. His skills don’t improve, but the teams around him do, almost preternaturally so.

Though the walls can sometimes be tilted by the players’ concerted movements, and some courses feature gravity twists, it sounds pretty much like bulldog’s charge with everyone running in the same direction, which is hard to imagine being much fun to play or watch. That the sport is also known as Forerunner is perhaps too big a clue to where the book will take it, and this heavy-handed hint is offered long before the reader has had a chance to start caring about the sport or its secret purpose.

Maybe that is what makes it a hard book to like: it assumes from the beginning that the reader is fully invested, in all its information, in all its characters and planets, in their multitude of names, in everything it wants to say. The plot takes a while to get going, and starts winding down with a quarter of the book still to go. However, the plot pieces do fall into place neatly towards the end, and a later scene where Rafi watches Dllenahkh, a Sadiri, return briefly to his home planet was extremely moving. I wouldn’t mind reading more from the author, but I’d want to start with the first in the series. ***

This review originally appeared in Interzone #258.
Posted by Stephen Theaker