TQF69: UNSPLATTERPUNK! 4 is now out in paperback and ebook! 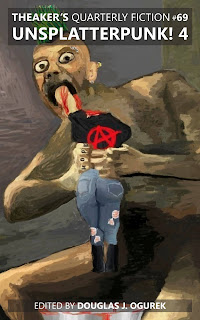 Welcome to UNSPLATTERPUNK! 4, edited by Douglas J. Ogurek. Six stories unite the gruesome contents of the splatterpunk subgenre with the millennia-old notion that art should offer moral instruction. In the tales that follow, villains use advantages, whether a silver tongue or a silver spoon, to subject others to humiliation and violence. Things get shoved into or pushed out of tight places. Flesh tears. Eyeballs burst. And of course, people get eaten by familiar and not-so-familiar species. However, these stories also offer moral nuggets that can’t be found in splatterpunk: a call to share our feelings with those we love, a declaration about the importance of tolerance and unity, a critique on capitalism in America, an appeal to use our skills for good, and a warning about imposing our values on others. This instalment concludes with what could be the most repulsive entry in the UNSPLATTERPUNK! canon: Rick Saldana’s “Boot Camp”, a mind-and-other-body-part-expanding examination of economic disparity, youthful indiscretion, and the ability to transcend life’s most trying moments. Prepare yourself for the next phase of unsplatterpunk – you’re about to learn some painful lessons.

Chisto Healy has been writing since childhood, but he only started following his dreams and writing full time in 2020. On top of the award-nominated, self-published novels from his earlier days, he now has more than 100 published stories. You can find out more at his blog chistohealy.blogspot.com or follow him on Amazon, where his new stuff is constantly coming out. He lives in North Carolina with his fiancé and her mom, his daughter Ella who has inspired his stories, his daughter Julia who has been published alongside him, and his son Boe who thinks the world is his drum..

Born into a large Italian family in the Arts District of Dallas, Texas, Edward Villanova is the product of culture and chaos. He began writing at the age of four, and credits reading Harlan Ellison’s I Have No Mouth, and I Must Scream at the age of six as the definitive moment that he fell in love with horror. Edward hosts the comedy horror podcast Eddie V’s Horror Show, where he discusses terrifying happenings, scary movies, and the art of writing, all with a comedic bent. His published works include political nonfiction under another name, as well as fiction in The Scarlet Leaf Review and via Kindle Direct Publishing.

Ben Fitts is the author of more than thirty published short stories. His debut collection My Birth and Other Regrets was released by the indie press NihilismRevised in 2019. He lives in Brooklyn, New York, where he writes weird stories, plays guitar in the indie rock band War Honey, and puts too much hot sauce on everything.

Tim J. Finn was born in Boston and still calls the area home sweet home. He penned his first story, an origin tale for Aurora’s Forgotten Prisoner of Castle Mare kit, while enrolled in Catholic school. The good nuns no doubt felt his literary tastes confirmed their convictions regarding the sinister nature of a left-handed person. Tim is a member of New England Horror Writers and the Horror Society and holds a B.A. in English from Grinnell College. His work has been published in numerous anthologies and magazines. Please visit his website www.authortimjfinn.net.

Eric Raglin is a speculative fiction writer, podcaster, and horror educator from Nebraska. He frequently writes about queer issues, the terrors of capitalism, and body horror. His work has been published in Novel Noctule, Fever Dream and Shiver. Find him at www.ericraglin.com and www.twitter.com/ericraglin1992.

Rick Saldana is an award-winning pig breeder from Wales. He also writes fiction..