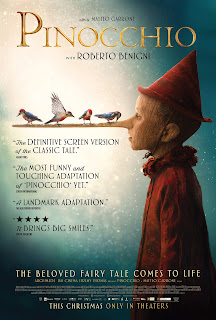 Poor carpenter Geppetto (Roberto Benigni) carves Pinocchio (Federico Ielapi) from a piece of magical wood. Geppetto proudly proclaims his love for his son. Alas, Pinocchio is much more an adventurer than he is a student, and because of his disobedience, he gets separated from his father and their small Italian village. Thus begins a quest to make it back to Dad.

During his journey, Pinocchio undergoes several challenges and encounters a variety of eccentric characters. Some of the adults, many of which are thinly disguised as animals, have malicious intents, while others want to help the wooden boy. Examples range from a seemingly avuncular old man who transports carriages full of boys to a place where they can play all day to a cautionary cricket and a melancholy tuna.

This Italian version, directed by Matteo Garrone, resurfaces most key elements of the original story. I was taken aback by the brevity of the nose-growing scene. Shouldn’t this classic Pinocchio detail be given more screen time? As it turns out, the original Disney version only had a brief scene as well.

Initially, I was also disturbed by Pinocchio’s lukewarm desire, which isn’t expressed until halfway through the film, to be a boy. But then, this is a boy—how many boys know what they really want? Sure, he misses Geppetto and wants to get back to him, but there are so many opportunities for fun. Like a boy, Pinocchio is easily distracted and flits from one thing to the next. The way to become a real boy (or is it a man?), the film suggests, is to give up selfish aims and instead focus on caring for others.

In a commendable departure from CGI, this film relies on human actors to play animals. Nevertheless, shysters Fox and Cat, two such characters that get the most screentime, offer stagy performances (e.g., overblown gestures, extreme facial expressions, funny voices) that compete with the annoying exuberance of typical CGI characters. But children like such exuberance, don’t they? Fox and Cat waylay Pinocchio and attempt to steal his coins so they can fulfil their obsession of finding something to “nibble.”

Pinocchio’s absence of strings is another interesting consideration. When he gets involved with a traveling puppet show, his fellow puppets are all controlled by strings. Interestingly, those who control the strings are never shown. Thus, when the puppets are outside, for instance, their strings lead back into the trailer. The protagonist’s missing strings comment on Geppetto’s strength as a father . . . his willingness to sacrifice control and let Pinocchio learn from his mistakes.

Most enjoyable about this film are the details with which the settings are rendered, from the muted colours of pubs and woodworkers’ shops—it’s as if everything has been coated in a layer of ash and sawdust—to the vibrant fields that Pinocchio traverses.

This is the kind of movie that makes you want to sit in front of a fireplace in a wooden chair and smoke a pipe or sip a whiskey on a winter’s eve. Do you really want to do that, though?—Douglas J. Ogurek***