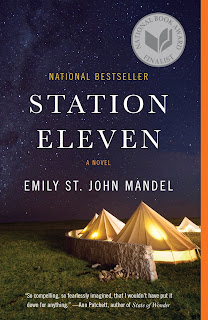 It’s hard to believe that in the middle of Station Eleven, a novel that is, on its surface, about people trying to survive decades after a superflu, there are interviews between high-profile job coaches and corporate executive administrative assistants, or between tabloid journalists and movie stars. This oddity comes thanks to author Emily St. John Mandel’s unique (and in this case, effective) structure.

The story revolves around a live performance of King Lear during which two major things happen: prominent actor Arthur Leander dies and the Georgia flu that will decimate 99% of the world’s population takes hold. The rest of the novel moves back and forth in time, from the events immediately following Leander’s death to the new world that exists decades afterward, and back to the stories of Leander and his acquaintances well before the event. Among the characters, all of whom are connected to Leander, are his wives, fellow actors, business associates, friends, and the adult manifestations of those who were children when he died.

The post-apocalyptic protagonist is Kirsten, a member of the Travelling Symphony that performs orchestral music and Shakespearean plays in a world where people will kill you for the contents of your backpack. The symphony uses a caravan of pickup trucks that run not by gas — that ran out three years after the collapse — but by horses. The front of the caravan bears a slogan: “Survival is insufficient.” And thus St. John Mandel poses a question to the reader: if survival isn’t enough, then what is?

The symphony confronts a cult led by the Prophet, a charismatic and cryptic smooth talker with some questionable behaviours. After they abandon the cult, the performers are concerned that it might have long tentacles … tentacles that come after them.

Woven into the novel are highlights from Arthur’s life including his ascent from a nobody on a small island in British Columbia to an internationally revered film star and the many complications that come with such fame.

Miranda, one of Arthur’s wives, is the creator of Station Eleven, a far-future sci-fi comic book, which not only foreshadows the actual novel’s apocalyptic events, but also ends up revealing the long-lasting and unpredictable power of art. With his trademark Pomeranian and red fedora, Dr. Eleven, along with his colleagues, lives on a moon-sized space station (Station Eleven) that resembles a water planet. Miranda sees Dr. Eleven and his strange world as a source of comfort. She is not concerned about publication — it’s more about the love of creation. The obscure comic, gifted to Kirsten by Leander before he dies, will play a pivotal role in her story.

Another storyline follows Arthur’s longtime friend Clark, a former C-suite coach who lives at an airport after the superflu. There he curates an exhibit of technologies that no longer work. Among the unique cast of characters at the airport are Elizabeth (Leander’s second wife) and her son Tyler.

Just as much as it is a post-apocalyptic survival story, Station Eleven is a reflection on mankind’s accomplishments and foibles. In one excerpt, St. John Mandel reflects on the things lacking in this new world that characters (and we readers) took for granted in the modern world … things like the internet and airplanes. With or without those things, the reader learns, there are going to be problems and opportunities.—Douglas J. Ogurek****