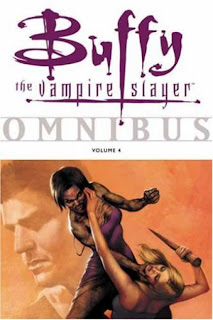 Enjoyable stories, but pretty forgettable on the whole – evidenced by the fact that I know I’ve read some of these issues before, but none caused any sparks of recognition. There’s too much focus on action, too little on character and dialogue. I understand why it worked out that way – how much characterisation can you manage when the show is still airing? All you can do is echo what’s already been shown on screen. But one of the great things about Buffy was that things changed, and since that can’t happen here a big chunk of the programme’s appeal is missing. Plus, this isn’t quite the Buffy of the TV series – she’s too fluffy.

There’s a funny bit towards the end where Angel gets strangled. His response – “Grip… So tight… Losing air…” (p. 358) – somewhat contradicts his discovery that upon becoming a vampire (p. 235): “I… I can’t breathe!” I’ll claim a no-prize for suggesting that the soul collector’s attack in the later story is psychological rather than physical.

Despite my griping, it was still good to spend bonus time in the company of the Scooby Gang. It was like eating a packet of bourbon biscuits – enjoyable, but nothing like eating chocolate Hobnobs.