The Filth, by Grant Morrison and Chris Weston – reviewed 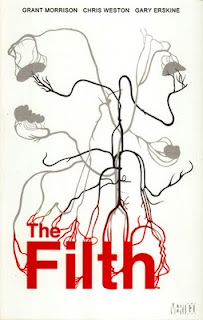 Sleeper agent Greg Feely is activated in order to fight the rising tide of anti-persons in a hilarious wig. But who’s going to look after his cat while he’s away?

You get the impression here that Grant Morrison is writing the kind of comic he really wants to read, or maybe the kind of comic his characters would like to read. He seems to be having a very good time, as if the need to keep The Invisibles at least semi-intelligible (in order to keep enough readers to keep it going to the end) was a hobble he could cast off for this thirteen-issue series. It’s bizarre, difficult and challenging, but also very good fun. At times I got the same feeling I had when reading 2000AD as a kid: they shouldn’t really be letting me read this!

The artwork by Chris Weston is the best I’ve ever seen by him. This must have been quite a hard book to work on, and he does brilliantly. Whenever the words get overwhelming or just a bit too baffling, you can rely on the art to keep you ticking over.