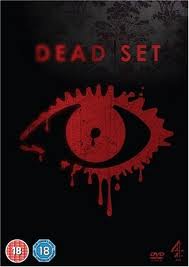 The idea behind Dead Set is that the Big Brother compound would be as safe a place as any in the event of a zombie attack. Though the writer of Dead Set, Charlie Brooker, is best known for his comedy writing – notably TV Go Home, the under-rated Nathan Barley and the unmissable Screen Burn – this is an 18-rated drama with a satirical edge and some incidental humour, much like the original Dawn of the Dead, rather than an outright comedy.

A zombie film set entirely in the Big Brother house didn’t seem like a brilliant idea when first announced – the potential for cheesiness was immense – but it gives the programme something that’s a huge benefit for any survival horror (or indeed any battle sequence): a convincing sense of place. We know the layout of the house interior, the way the camera runs surround it, and the way it’s all fenced off. If the viewer already knows the layout, they don’t waste any time trying to figure it out, and can spend all their time being scared. That’s where the special edition of Aliens wins out over the original version, and it turns out to be one of Dead Set’s greatest strengths.

The satire is of Big Brother itself, and is surprisingly harsh given the appearance of Davina McCall and the use of the actual Big Brother house, logo and music – for example there’s a scene where a producer literally rips the flesh from a contestant to feed him to the “public” as a distraction. Big Brother at its best is all about getting under the skin of contestants, and at its worst is all about throwing them to the mob – well done to Brooker for realising how well both elements lend themselves to zombie horror.

Dead Set is really well made, with a very strong cast. The director is perhaps a little too fond of 28 Days Later and its sequel, but there are worse films to imitate. Simon Pegg, writing in The Guardian, has criticised Dead Set’s zombies for running around (in imitation of the infected in those movies), but from what Brooker wrote in the same newspaper it sounds like the running got the programme into production after a long delay, so it would be unfair to be too critical on that point.

As a television event, it’s likely to be remembered by the general public for its premise rather than its plot or characters, but like the BBC’s Ghostwatch, that premise is good enough to ensure that it will be remembered.

It was scary, exciting, well-made and very unusual for British television, but it’s unlikely to knock the socks off aficionados of zombie horror. Dead Set is a skilled, frightening entertainment rather than a wholesale reinvention of the genre.