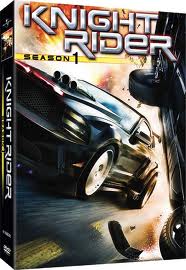 In this sequel to the original series Mike Traceur (he soon adopts the Knight surname) is played by Joey Tribbiani. Some readers may remember him from Days of Our Lives or from Mac and C.H.E.E.S.E, or for his role opposite Gary Oldman in…

Okay, so really he’s played by Justin Bruening, but you’ll be hard pushed to spot the difference – and that’s not totally meant as a criticism. As the episodes roll on, Mike and KITT (played by Val Kilmer) develop a comfortable tough guy/soft boy chemistry that isn’t a million miles away from Joey and Chandler.

This version of KITT has more tricks than Chitty Chitty Bang Bang. He’s often compared to the Cylons, but the technology in this programme leaves that in BSG way behind: for example in episode two KITT reveals his 3-D object generator, a magic glove box! As the occasion demands, KITT’s a tank, a CSI lab or a submarine, and I’m sure that by the end of the season we’ll see him flying into space. That’s part of the fun – there’s a Thunderbird 2 factor, in that you never know what the gimmick will be in each episode.

As to the actual episodes, the initial two-hour pilot was dreadful and dull, but since then the programme has slowly but steadily improved, in entertainment value if not quality. A Fast and the Furious episode was followed by a Point Break episode, and then by another that had a touch of Queen & Country about it. Bikinis make frequent appearances.

There are lots of signs of behind-the-scenes wrangling. For example, in episode one Mike’s death is publicly staged, but then in episode two he bumps into an old friend, blowing the secret identity out of the water. There are two sets of cast members in the backroom staff – those from the pilot, and then those brought in for the ongoing series, which makes the base seem rather overstaffed. (In fact, as I write this it’s been announced that three of the cast – the three oldest, of course – are to be axed for the second half of season one.) Unlike some programmes, though, the changes seem so far to be taking Knight Rider in the right direction.

Like the original, this is a programme about a big doofus with a cool car getting into trouble. It’s dumb but fun. It would be a tragedy if everything on US TV went back to being this stupid and silly, but there should be room on the schedules for an hour of daft action. And it gets some things right: in contrast to Fringe, say, the heroes do at least take an active and determined role in events.

If the programme has nothing else to recommend it, in episode six it joins Family Guy, The Middleman and The Big Bang Theory in paying tribute this year to Doctor Who. A transparent attempt to win over the geeks who have been giving Knight Rider so much grief? Probably, but it went down very well in our house!