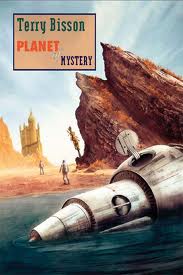 Two astronauts land on Venus, but it’s not the superheated sauna they expected – it’s much more like the place Carson Napier visited. And that’s impossible… They try to make sense of what’s going on, and cling to the hope of getting back to Earth. There’s an adorable robot, plus centaurs, UFOs, and disturbing orange panties.

Planet of Mystery is a playful, frivolous, serious and thoughtful book. If it has a flaw it’s that the reader may conclude early on that he or she has already seen this particular episode of Farscape (or Stargate, or Star Trek), but ignore that feeling, it’s much more interesting than that.

This is a story that operates on the subconscious level, using repetition and startling imagery to create a dream-like effect. It’s also very sexy.

In my sf reading I’ve pretty much gone straight from reading seventies-era paperbacks (and reprints of even earlier material) to bang-up-to-date review copies like this one. I haven’t read much from the intervening period, so this was my first book by Terry Bisson. I’m guessing it’s fairly untypical, but I’ll soon find out since it’s left me wanting to read more. After this trip to Venus, a voyage to the red planet seems appropriate.