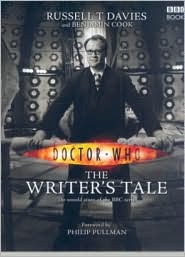 An absolutely brilliant book. Doctor Who’s been blessed with a wonderful range of non-fiction works over the years, not least among them Benjamin Cook’s book on the audio adventures, but this tops them all.

You get to see what goes through the mind of the man presiding over what’s arguably the greatest triumph of modern British television. There are dozens of surprises in here. Sometimes it’s how early some things happened (Steven Moffat had written the first pages of episode 5.1 – to be broadcast in 2010 – by 13 January 2008), and sometimes how late they were left (Russell Davies is still writing 4.13 on 18 February 2008 – only a few months before broadcast).

You learn about scenes that weren’t filmed, scenes that were but went unused, companions who missed their chance, and all sorts of other things. Don’t show your face on the Outpost Gallifrey forums without having read this from cover to cover: you’ll seem hopelessly uninformed.

And once you’ve read it, hopefully you won’t post on there without considering the effect that a needlessly cruel comment can have on the people putting in sixteen-hour days to make this programme…

Doctor Who: The Writer’s Tale

Email ThisBlogThis!Share to TwitterShare to FacebookShare to Pinterest
Labels: Book Reviews, Doctor Who