The Best Horror of Dark Horizons 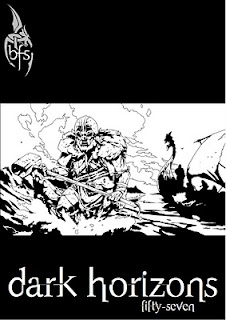 I was very chuffed to see that no less than eight stories and poems from Dark Horizons 55–57 appeared in Ellen Datlow's online list of honourable mentions for best new horror of the last year or so. It’s a very, very long list, but it was a really nice surprise to see some stuff I published on it.

Stephen Bacon, “The Other Side of Silence”, Dark Horizons 57

This was a cracking story about an apocalypse of deafness and blindness, and a survivor getting the chance to experience sight and sound again. The part that sticks with me is the husband and wife together, knowing they have been struck by the plague, unable to do anything to stop it.

A lost young man, trying to make sense of his childhood and life, is haunted by the image of a girl in a train window. I loved this moody, eerie story; one of the artsier pieces I published in Dark Horizons.

I’d mentioned to Mike Chinn how much I’d enjoyed his book The Paladin Mandates, my only disappointment being that the hero didn’t spend enough time in the air. Imagine how delighted I was to receive this new story in the series; easily the longest story I published in Dark Horizons, and worth every page. (I was strongly reminded of it when watching Altitude last week.)

Ian Hunter takes the credit for selecting this for publication rather than me, but I can take the credit for appointing Ian as poetry editor! A smart poem; wish I’d given it more room in the layout.

And here is Ian too! I published a series of stories by Ian in Dark Horizons, all different, all interesting. This was one about a group of villains gathered to undergo a vampire initiation rite.

I think this was the most traditional supernatural story to appear in my issues of Dark Horizons. It was so well written and the ending was brilliant. Faithful Midnight, the canine ghost patrolling the house every night, was unforgettable.

Ralph Robert Moore, “In the Tunnels of the Agogs”, Dark Horizons 55

Of all the stories I’ve published in Dark Horizons and TQF, this is perhaps my favourite. In fact, it’s one of my very favourite short stories ever. An expedition is mounted to rescue a woman from the Agogs, cow-like beasts that swallow humans in their huge mouths, to live in their stomachs. The premise sounds silly, but it’s written with such gripping seriousness and intensity that it’s utterly terrifying. So proud to have published this story.

Another superb story by Ralph Robert Moore. Shame we couldn’t get this out in a Christmas issue (Dark Horizons published in September and March during my period in charge); it was about a couple terrorised by cruel, intelligent snowmen. And inside the snowmen’s heads? Real brains.

Well done to all those marvellous writers! And look out for the book itself. If these excellent stories only made the longlist, the stories in the book itself, The Best Horror of the Year Volume 3, must be real corkers.