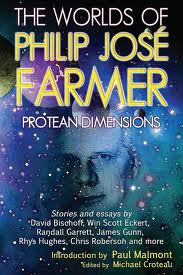 When I was about ten or eleven my dad gave me a box of books. They weren’t fancy – most were library rejects. Years later I counted up how many books I had read by my favourite authors; almost all but Terrance Dicks and Philip K. Dick were in that box: Moorcock, Asimov, Heinlein, Van Vogt, Aldiss and so on.

One of those books, and one of the first that I read, was The Stone God Awakens, in which a long-petrified human wakes up to find himself in a world where some animals have evolved into humanoid forms. It was a long time ago now, so I don’t remember much, but one thing stands out: the hero has sex with a cat lady.

As the moment approached, I remember thinking, “He won’t surely?” But he did: Philip José Farmer was a writer who always did!

This diverting book follows on from Farmerphile, a magazine that ran for fifteen issues. You might think that would leave little for a book, and it’s true that Farmer’s contributions are not extensive, but editor Michael Croteau has built a very good book around them.

The first half is given over to non-fiction and Farmer’s own work. Much of this is fascinating, for example seeing him roll an idea around in the inchoate “Newly Born, Newly Dead” to see what sticks. “The Bite of the Asp” is Randall Garrett’s account of a story’s mutilation at the hands of Hugo Gernsback. “It Could Make a Great Fantasy” is an essay by Laura Wilkes Carey about an idea Farmer had for a fantasy set in a Book of Mormon universe. One guesses the reason it was not pursued might not have been unrelated to the problem of dealing with the idea that brown skin is a punishment for one’s evil ancestors!

An article by Jack Mertes on Farmer’s brushes with Hollywood was the first thing I read; I knew the ending already, but I was keen to discover why things worked out that way. But maybe that story isn’t quite over: Farmer’s big concepts are perfect for Hollywood, and it’s only a matter of time before someone notices. The odd thing is that even his books of forty years ago might still be too controversial for the big screen.

A previously unpublished Danny Adams interview with Farmer from 1997 provides lots to think about, such as his advice to would-be writers: “My main suggestion is to have a profession or a job, or a spouse, man or woman, who’s got a job and will support you while you’re writing.”

For me the highlight of the first half was the section Classic Worlds, which offers the story “Sail On! Sail On!”, an excellent essay by James Gunn analysing the codes and signifiers embedded in the story for SF readers, and a comment on the story by Farmer himself, explaining why he didn’t follow it up with a sequel: he couldn’t work out the science of the world. But watching him try is an education.

The rest of the book, the larger part, is given over to original fiction inspired by the work of Philip José Farmer, or by the man himself. I expected to be a little lost here: I’ve read a lot of Farmer’s books, but quite a while ago now, and the books being riffed on here weren’t always the ones I’ve read; there are no Riverworld or Dayworld stories. But I needn’t have worried. Most of the stories stand alone, and are enhanced by knowing the originals rather than spoilt by not knowing them.

“Infamy” by Edward Morris and “Le Maréchal” by Paul Spiteri both feature Farmer as a character. In the first he is a young man interviewing William Burroughs, currently working on his novel Tar-z’n of the Apes, in the second a time traveller adventuring in the thirteenth century. Two very different tales, both very good. “A Kick in the Side” by Christopher Paul Carey is a brief but entertaining and clever spin-off from Flight to Opar.

“Is He in Hell?” by Win Scott Eckert is a story of the Scarlet Pimpernel, designed to explain how the progenitors of the Wold Newton family tree came to be gathered in one place where the meteor struck. Interest in the story and its accompanying family tree is likely to be largely limited to fans of Wold-Newtonry, in the same way that All-Star Squadron finds its readers among fans of DC continuity, but it wasn’t a bad story.

“No Trees of Earth” by David Bischoff presents an episode from the gap between The Maker of Universes and The Gates of Creation. Robert Wolff is coming to terms with his rediscovered memories of his life as Lord Jadawin, but loses lover Chryseis to the secrets of his newly recovered mansion. Exciting, mysterious, and with a few tweaks to the plot wouldn’t have been out of place in the recent Jack Vance tribute, Songs of the Dying Earth.

“The Final Flight of Greatheart Silver” by Chris Roberson takes an old airship pilot back into the skies for one last time, centralisation having led to a monopoly on the skyways for a big corporation. The story’s villains are chillingly bad, but it suffers from a lack of subtlety: the liners that dominate the sky are called The Da Vinci, The Potter, The Twilight: “the conglomerate makes enough money off of them that it doesn’t even want to bother with anything else”. The “heroic” conclusion has rather uncomfortable real-world resonances.

In “Flesh Endures” Dennis E. Power combines two stories, neither of which I’ve read. Hozay plays in a great tournament, the Great Series being to baseball what the Mean Arena is to basketball. The MVP (Most Virile Player) wins the chance to make hay with Miss Liberty in the Great Rites, but a challenge throws Hozay into a one-on-one fight with Jamdar Zhulayn, who makes no secret of his plans for the priestesses should he win. An exciting, brutal post-apocalyptic adventure with a fine ending.

My favourite story in the collection, despite strong competition, was “The Pollinators” by Rhys Hughes, a relatively restrained story by his standards, set in the world of “The Lovers”. A chat with Hal Yarrow stimulates a change in the life of Nosy Sam, leading him eventually to the jungles of the Malay Federation and an unusual branch of evolution. It’s not perhaps a story Farmer would have written himself, but it shares his spark and imagination.

Your enjoyment of this book is likely to be in proportion to the number of Farmer’s books you’ve read – and how much you enjoyed them – but there is plenty here, both non-fiction and fiction, that would be of interest to any science fiction fan. The variety of its contents bears witness to the astonishing variety of Farmer’s own work. For Farmerphiles, it’s quite essential.