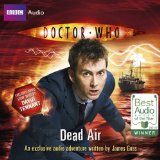 Due to the tardiness of my reviewing, this takes us back to the days of David Tennant in the Tardis. It seems like so long ago, but the passage of time is quickly forgotten as the reading begins. A recording found on the wreck of a pirate radio ship has been restored, and this CD is the result. The voice on the tape is that of the tenth Doctor, travelling alone post-Donna. Radio Bravo was infested by a rather nasty entity called the Hush, and the Doctor followed it there.

This is essentially The Boat That Rocked crossed with The Thing. The crew are an assortment of DJs from the dawn of time: Tommo, smooth Jasper, Liverpudlian Layla. One by one they fall prey to the Hush, the story putting the surviving characters in situations where it is often difficult to tell when the switch has been made. It’s up to the Doctor to find a clever way of stopping it, but is he quite as clever as he thinks? And this CD that I’m listening to, was it really a good idea?

Of the Who CDs I’ve listened to lately, this wasn’t my favourite, the broad characters and accents of the pirate DJs clashing somewhat with the serious and frightening plot. I enjoyed the way that the CD itself was worked into the plot, and the story exploited its status as an audio adventure very well – it wouldn’t have worked in any other format – but it just didn’t excite me. David Tennant’s reading is committed and sincere, but we don’t see any new facets to his characterisation or performance.

Not bad, but not great either. It was really good to hear David Tennant as the Doctor again, though.