Doctor Who: The Last Voyage – reviewed 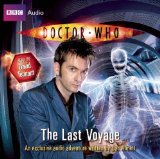 In this two-CD adventure the tenth Doctor lands upon what appears to be a spaceship, but is actually an Interstitial Transposition Vehicle. He’s barely aboard before almost everyone disappears. His goal (as usual!) is to gather the survivors, work out what’s going on, convince them he isn’t to blame, and save them from disaster. In this he’s helped by Sugar McAuley, a flight attendant – or rather, “comfort mediator” – whose lashtop computer will prove very useful later on. But before getting better, things get worse: passengers start to hear their names being whispered, strange beings seem to snatch them out of reality, and when they reach their destination things don’t improve at all.

This was a nicely-written adventure read very well. The setting gives David Tennant several very different characters to get stuck into, and he mostly does a great job, though I found his Sugar McAuley a little rougher on the ears than Liverpudlian Layla in Dead Air; I didn’t look forward to her dialogue, and there was quite a lot of it. At times the Doctor’s own dialogue feels like a run-through of this Doctor’s greatest hits – “I’m sorry, I’m so sorry”, “Well... Well...” and other Tenth Doctor stand-bys get a run-out – but I doubt fans will complain about that; I won’t.

Doctor Who has a long, proud history of pilfering its plots from the best, and the main plot of this one felt a little too close to Stephen King’s The Langoliers for me to be completely enamoured. But I did enjoy listening to it. The story has several neat ideas, from those lashtops to the nature of the spacecraft itself, and the way the Doctor manages to fix it. There are some great sound effects, some good mysteries, and a bunch of interesting characters. It’s not a dud by any means, but not quite a classic.