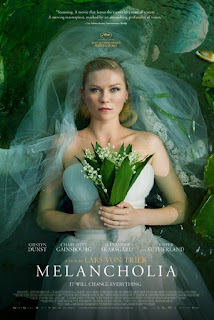 As the rogue planet Melancholia performs a crazy, slingshotting trapeze across the galaxy, privileged sisters Justine (Kirsten Dunst) and Claire (Charlotte Gainsbourg) live out their final days in dismal, otherworldly isolation and country estate gloom, a state of existence that is induced only in part by the prospect of planetary dancing partners Melancholia and Earth spinning and twirling their way to doomsday.

Melancholia commences with eight minutes of self-spoiler, the prelude to Wagner’s Tristan und Isolde flowing forth and bringing with it a collage of slow-motion images: stately lines of dual-shadowed hedges; a bride, page boy and bridesmaid stepping forward beneath the light of twin moons; a woman fleeing with child in arms across the nineteenth green of a deserted golf course; bats dropping from the sky; falling leaves, falling horses; the bride floating serenely in water, standing unaffected, striding through sticky undergrowth like Mr Knox through Mr Fox’s new blue goo; and, most notably, ectoplasmic wisps of electricity dissipating off into space, upon which galactic stage there unfolds an impending, then actual, planetary collision. By “outing” his movie’s cataclysmic ending in this way, writer/director Lars von Trier ensures that it remains just a backdrop to the story. Planets will clash, the world will end, yet – freed from any worrying uncertainty as to how events may pan out – fretful viewers are left to focus unencumbered on what the film really has to say.

Plot-wise, Melancholia is split into two parts – the bizarre, hoity-toity wedding reception of Justine and Michael (Alexander Skarsgård), and the post-wedding, pre-apocalyptic calm wherein Justine comes to stay with her sister Claire and brother-in-law John (Kiefer Sutherland). The imagery is striking throughout, the music portentous, and with the protagonists’ fates already determined, the planets are in perfect alignment for insightful character studies and explorations as to what makes the main players tick.

Which is where von Trier’s cinematic cleverness turns problematic.

Melancholia presents a plethora of odd characters, from sisters Justine and Claire themselves (supernaturally disengaged and obsessive-compulsive, respectively) to their bipolar-disorderly and estranged parents (Charlotte Rampling and John Hurt) to Justine’s supercilious boss (Stellan Skarsgård) and fleeting, interloperly co-worker (Brady Corbet) to new brothers-in-law Michael and John, both of whom display a quirkiness that, though palpable in its own right, barely registers against the film’s high background levels of outlandish and unnatural behaviour. The acting in all cases may be unimpeachable, but in no instance is an explanation given for any of these extremes of personality. Dunst and Co. seem to be portraying strange for the sake of strange, and as Melancholia falls with art-housed inevitability across its own backdrop, many cinema-goers will find such deliberate sketchiness – a conscious surrealism, almost – to be painfully insufficient.

Having already disavowed the scientific rigour of his fiction1 – but leaving incredulous viewers with plenty of downtime in which to wrap towels around their heads and wrap their heads around the so-called planetary dance of death – von Trier pleads the Fifth Amendment vis-à-vis character exposition, wilfully negating all the character in what purports to be a character study. Consequently, what remains to the viewer is little more than what Justine constructs for her young nephew; that is, a “magic cave” tee-peed together from whittled sticks; the fashionable illusion – or delusion – of a privately beholden intellectual mansion or exclusive golf course par excellence. In short, it is The Emperor’s New Clothes – another Danish creation – all over again, only with Hans Christian Andersen dying in pre-production and his place having been taken by Lars von Trier, lost progeny of the Brothers Grimm.

For those viewers whose bent it is to suffer through wistfully hollow cinematography, let it not be said that Melancholia offers nothing of value. Alluded to in plain sight within the movie’s title is a striking (if harrowing) mood piece: a study in depression and of the debilitating – or, in times of great stress, liberating – effect this can have on people. Depression, of course, is a serious subject, and is perhaps felt especially close at heart by light-starved denizens of the Nordic countries; yet, as much as Melancholia might capture the stark emptiness or colourless stupor of Seasonal Affective Disorder (SAD), the realisation of this condition on-screen, even at its most haunting and compelling, cannot disguise or excuse the film’s wanton faithlessness in respect to creating representative, believable characters. If mood disorder is the opera of the day – lugubrious melancholia, Wagner riding shotgun – then von Trier, in scripting so artificial a clique of players, seems to imply that it affects only those who are in some way peculiar or mentally unstable to begin with. He excludes out of hand all the everyday people who are afflicted, and by focusing instead on strangely flawed, “interesting” protagonists – an admission, surely, that mood alone cannot sustain a movie – he cheapens the film’s underlying premise. If Melancholia is intended to present itself as a lingering, evocative landscape of mental disorder, then it does so only covered in pointless and fanciful anomalies – as if Easter Island were dotted not only with hundreds of Moai but also with five or six randomly assembled, thirty-foot-high Mr Potato Heads.

The sad truth of Melancholia is that it fails to engage. Whole scenes could be shunted around – many a forlorn and popcorn-bereft viewer will have contemplated this, surely? – all dialogue could be omitted save Kiefer Sutherland’s, and it would hardly make any difference. The most damning reaction that can follow a movie is the one where nobody leaves the cinema when the end titles roll, not because they are so enamoured that they wish to hang on to every last tendril of the experience, but rather because stultification has set in and every pair of eyes is locked to the credits, wild and staring like those of a gambler on a losing streak, searching feverishly for an unnoticed cameo or funny crew name or anything that might justify having frittered away the preceding two hours.

Melancholia, for those who might have missed it, gives thanks to Penélope Cruz (who made no appearance) and employed Dr Dirk Poppendieck as legal advisor.

1. Per Juul Carlsen, “The Only Redeeming Factor is the World Ending”, FILM 72 (May 2011), pp. 5–8. [http://www.dfi.dk/Service/English/News-and-publications/FILM-Magazine/FILM-72.aspx]
Posted by Stephen Theaker