Doctor Who: The Whispering Forest - reviewed by Stephen Theaker 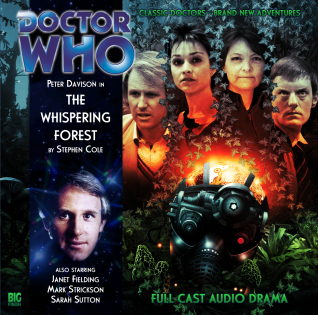 Following the events of Cobwebs, the fifth Doctor asks the Tardis to listen out for trouble. She takes them to Chodor, a planet on which the listener has already encountered human colonists. Besieged by Takers who snatch them from their beds and the whispering ghosts that flock in their wake, they rub their skin raw to keep themselves clean and cut their hair short. The humans have lost their leader, and the Doctor and friends, with their dangerously long hair and baby soft skin (“Er, thanks...” says Tegan), become pawns in a power struggle, between Sesha, progressive daughter of lost Anulf, and Mertil, his righteously murderous widow.

Whether Mertil was a true believer or a cynical manipulator of the belief of others I wasn’t sure; each interpretation would make her actions and tone of voice at certain points a bit out of character. Also, I had a problem I often do with stories where the status quo is so badly out of balance, and yet the situation has persisted for a very long time. As Tegan says, "Things change around the Doctor", but they tend to change without him too, and it’s hard to believe none of the humans have figured anything out for themselves. People brought up in a religion inevitably ask themselves at some point whether it’s all made up; hard to believe people forced to scrub their skin raw wouldn’t ever question its utility.

So it’s a story that brings up some big questions, and as usual the Doctor helps everyone find the answers they need. As in the previous story, there’s a big secret to be discovered, but the resolution of this one is not quite as satisfying, and the story as a whole is rather gruelling. One answer is given away a bit too early: what’s up with Tegan? Be sure to skip the trailer for the following story, inconveniently placed before the first episode of this one. Then again, I missed the trailer, and so the answer to that question hit me with full, nightmarish force. You might want to avoid that experience..! Overall, a decent but not outstanding adventure - with an unforgettable ending.