Doctor Who: The Wreck of the Titan, by Barnaby Edwards – reviewed by Stephen Theaker 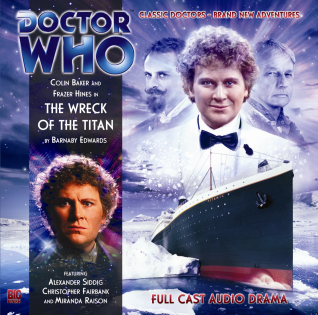 Every so often an item refuses to be reviewed, fights me at every turn, or like Lucius Shepherd’s Viator Plus is simply beyond the limits of my barely nascent critical faculties. I’ve struggled to review this sixth Doctor adventure. At first I used MP3 Merger to turn it into one long audio file and put it on the Kindle to listen to, but the way it begins with a preview of the next story, the long stretch of incidental music at the end of episode two (during which I invariably fell asleep), and a big chunk of episode three going missing during the merge process all conspired with a story of timeslips and shifting locations to leave me as confused as Jamie and the Doctor are in this story. Trying to listen to it on the iPod or iPad didn’t go any better – I kept losing my place. The PC then? No, Windows Media Player got muddled up by the metadata.

Newer, less intransigent stories came in for review, and I retreated from this one, defeated by a combination of circumstance, technology and sleepiness. Now, having built up my strength reviewing the Companion Chronicles, I decided it was time to make another assault upon the Titan. I’ve got into the habit of burning the digital Who releases to CDs, which might seem a surprisingly retrograde step for someone so keen on ebooks and other forms of digital delivery, but if a CD is one of the five in my stereo I’ll usually listen to it once a day at least while working. This one I must have listened to nine or ten times, and I still can’t be sure I’ve quite got it, so I beg your indulgence for any silly mistakes.

The sixth Doctor and the older Jamie we met in City of Spires land on a grand ship, which they expect to be the Queen Mary, for whose maiden voyage the Doctor has tickets. But things aren’t right, and Jamie is the first to spot it: they are on the Titanic. Doors leading below decks don’t open, the band seems out of sorts, and the first officer is not the man the Doctor remembers. And then it gets really strange, with the story introducing people who are either pretending to be or really think they are Captain Nemo (played perfectly by DS9’s Alexander Siddig) and Professor Aronnax. This mysterious, adventuresome story forms the second part of a trilogy, continuing themes from the City of Spires, and ending on a remarkable cliffhanger that is surely resolved in the next story, Legend of the Cybermen. I can’t guess how a cyberman story might relate to this one, so there must be further surprises to come.

Though I found this story quite hard to get to grips with, that’s a function of how I listen to these adventures (usually while working or on my way to sleep). The script is keen, Colin Baker and Frazer Hines as the Doctor and Jamie clearly enjoying the quality of their dialogue. Howard Carter’s incidental music is very good, creating quite the grand sweep in the listener’s mind. The Doctor is completely wrong once or twice in this story, which he would presumably find a novel experience. It’s good for him, and good for the story: for once he isn’t in complete control of the situation and that encourages the listener to take it more seriously. It’s a good story for Jamie, too. He may not remember the Doctor, but his good sense is unimpaired, and he shows himself ready to think his way around a problem – or a conversation – until he finds a way in.

I enjoyed City of Spires, but this one just about tops it. The only disappointment is a sneaking suspicion that the next story will bring this excellent reunion to an end. I hope not, but shall find out soon.

Doctor Who: The Wreck of the Titan, by Barnaby Edwards. Big Finish, 2xCD.  This review (leaving off the first two paragraphs) originally appeared in BFS Journal #4.
Posted by Stephen Theaker