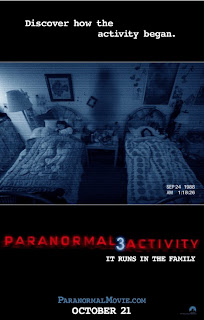 With each instalment in a series spawned by a groundbreaking horror film, the risk for failure increases. Many things can go wrong: the once effective scare tactics grow tired; acting talent diminishes; humour scenes fizzle. In a worst case scenario, the film flounders as a hastily assembled disaster that pales in comparison to its namesake. Paranormal Activity 3, like its predecessor, manages to avoid this fate.

This prequel reveals the haunted childhood of sisters Katie (PA 1 protagonist) and Kristi (PA 2 protagonist). In 1988, Dennis, the girls’ somewhat bumbling yet loving stepfather, discovers on a home video something odd enough to impel him to pursue it further (and therefore resume the raw footage technique that fuels the PA dynasty).

Though Dennis, a wedding videographer by profession, uses a roving camera to capture some of his home footage, his stationary cameras create the biggest impact. The camera in the couple’s bedroom shows a side view of the bed, a slightly opened door with views to the hallway, and, in a nod to the eighties, a view of itself in a mirrored closet. Another camera films the girls’ room, which, at night, glows with an eerie purple-white luminescence cast by their aquarium. What that camera doesn’t reveal is the waist-high storage space just behind it. This creates a particularly creepy effect when younger sister Kristi converses with an off-camera presence she calls “Toby”.

But the camera that gets the viewer’s heart pumping the fastest is the one that Dennis, seeking a wider vista of his lower floor, mounts on a rotating fan. This view moves between the foyer, a brick-enclosed fireplace, and the kitchen. The effect is one of severe tension: as the camera pans back and forth, the anticipation builds. What will it reveal?

PA 3 delivers a fun theatregoing experience. At several points, when the tension escalates, the directors treat the viewer to a laugh. For instance, Dennis’s videographer sidekick Randy shines as a gawky counterpoint to the gravity of the situation and the rigidly defined sets. The shaggy haired, rail-thin young man’s reactions to Dennis’s footage are legendary. At one point, Randy gives in to Katie’s whim to play “Bloody Mary” using the bathroom mirror. His response to what transpires admirably combines horror and humour. After another conflict-heavy scene, the camera shows a close-up of Teddy Ruxpin, the iconic eighties teddy bear.

Though it by no means equals PA 1’s ability to implant in the viewer a tension that lingers well beyond the experience of the film – perhaps no horror film does – PA 3 does pass the litmus test for a true horror film: it creates a physical reaction.

The PA trilogy has achieved its success not through eccentric characters, complicated plots, or vibrant settings. Each of these facets is developed only to the point it supports the cameras, and frightens the moviegoer. The strength of the PA series is keeping the viewer focused on what’s around the corner; what is not shown is just as important, if not more important, than what is. Thus, these films have the unique and surprisingly effective strategy of entrancing viewers by showing them an empty room in which nothing is happening.

In hindsight, one may unveil several flaws within PA 3: the motivation of the supernatural entities, the use of a mysterious symbol, straying a bit too far from the PA “less is more” mantra, and connection issues with the previous films. But these shortcomings should not impact one’s experience of the film. It’s a movie. So let it be a movie. And let it scare you.