The Gift of Joy, by Ian Whates – reviewed by Stephen Theaker 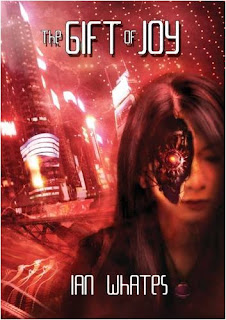 Though Ian Whates, chair of the BSFA and organiser of Northampton’s Newcon convention, has gone on to (presumably) greater things with novels for Solaris and Angry Robot, this self-published collection of short stories is an inauspicious beginning, one that never strains to reach beyond the closest language to hand, and rarely reaches beyond the most obvious ideas. The best of the stories are perhaps “Darkchild”, in which psychics are caught in an alien trap found in the asteroid belt – the ending was surprising – and “The Gift of Joy”, in which a former deep cover spy uses his talents for mimicry to work as a gigolo. “Hanging on Her Every Word”, horror rather than sf, has an old plot but a painful conclusion.

The book bears a self-inflicted wound: author’s notes at the end of every story. At best such notes are like a magician showing the secrets of his tricks; how much worse when the tricks weren’t all that magical. For example, we learn with very little interest that the plot of “Knowing How to Look” was sketched out in a pub. That “The Final Hour” – which features seconds ticking away between paragraphs, an interesting effect spoilt by dialogue that would take much more than a second to say – was rejected by the anthology for which it was written. And that “Fear of Fog” lifted the collection’s most interesting idea – a human world living peacefully in alien space when Earth is at war with those aliens – from Stephen Baxter.

“Ghosts in the Machine” provides a line that could well be applied to the whole book: “What remained of the adventure was pretty straightforward.” The Gift of Joy is not awful; that would at least be entertaining. It’s just unremarkable, generic and straightforward, the stories feeling more like competent assignments than bursts of inspiration. The part of the book I’m most likely to remember, unfortunately, is when the protagonist of “Flesh and Metal”, prior to his fight with a shape-shifting android assassin, passes blithely by the scene of a gang-rape, describing the girl as a “stupid cow” for wearing the wrong clothes. “She’d certainly have something to tell her friends in the morning.”

. This review was originally written for BFS Journal #3.
Posted by Stephen Theaker