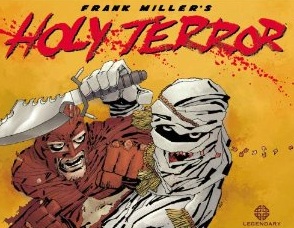 The names have been changed to protect the innocent intellectual properties, but it’s basically Batman and Catwoman snogging away when a sexy exchange student suicide bomber blows up the club on which they're snogging. They get to their feet, swing around the block, and take the fight to the oldest mosque in Empire City, beneath which they find a secret underground Al-Qaeda base.

I’ve loved or at least enjoyed everything I've read that Frank Miller’s been involved in: Daredevil, Ronin, The Dark Knight Returns, Martha Washington, Sin City, 300; I even enjoyed his film The Spirit – so not liking this should have been an uphill struggle. It really wasn’t. The story is thin, the artwork feels like a cut and paste of Miller’s earlier work, and, to be blunt, it’s completely bonkers.

This book seems so paranoid that it’s hard not to read it as satire. If the last page had shown George W. Bush face-down in a mountain of cocaine, it would have made perfect sense. Unfortunately, time overtook this review and Miller’s comments about Occupy Wall Street make such a sympathetic reading impossible. He really seems to mean it.

What to make, for example, a panel that shows Barack Obama and Jimmy Carter (I think it is) grinning under the banner “Our Moment Now”, as the Statue of Liberty is blown up? They’re in a line-up that includes Gaddafi, Ahmedinajad, Kim Jong Il and a shocked Hilary Clinton, obviously realising the error of her peacenik ways.

If you’re going to fight a war with comics, best make them good ones. If Miller has a point to make – and in The Dark Knight Returns, for example, I think he did have an at least arguable point about the Batman’s responsibility for the Joker’s murders – it’s lost among the sheer hysterical silliness. It’s like reading a comic written by a Daily Mail columnist.