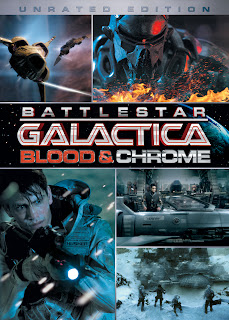 War with the Cylons has been raging for ten years when gung-ho new pilot William Adama (Luke Pasqualino) is posted to the Battlestar Galactica. His first mission, alongside jaded co-pilot Coker Fasjovik (Ben Cotton), turns from placidity to peril when their “cargo”, Doctor Beka Kelly (Lili Bordán), redirects them to a top secret rendezvous and subsequent infiltration deep within Cylon territory. As sacrifices are made and motivations uncovered, the idealistic young Adama must come to terms with war’s gritty reality…

—or some such. Consider it an exercise in loose terminology.

The original series of Battlestar Galactica (1978) become a cult hit, its premise – that of mankind’s seemingly futile, Frankensteinian fight for survival against its own ruthless progeny – proving sufficiently compelling to outlast memories of the lacklustre sequel series Galactica 1980 and eventually give rise to a successful relaunch with the born-again Battlestar Galactica of 2003–2009. Fronted by Edward James Olmos as the esteemed Commander Adama, this new take on the franchise started strongly before dwindling away into the ever-increasing spiral of absurdity that seems de rigueur of series that seek eternal renewal without ever a hint of resolution. This downward spin culminated in the abysmal Caprica (2010), at which point many a delirious viewer was left glassy-eyed and pining for the appearance (unforthcoming, except perhaps allegorically) of the scything seppuku Battleship ChickenTikkaMasala. Or Flight of the Conchords qua highly strung robots, singing, “The humans are dead, the humans are de-ead…” Or perhaps even Metal Mickey. Anything, really. Whatever was necessary just to make it stop.

And yet, streaming online and then direct to TV, the saga now continues.

Battlestar Galactica: Blood & Chrome may satisfy some dark, destructive craving on the part of BSG’s most diehard fans – of which there are some 4,500, judging by the farcical 7.4 rating on IMDB – but in essence what it amounts to is a step-by-step progression by which stock characters go through standard arcs amidst whirling, computer game graphics so as to provide a backstory so intrinsically bland that it will have papier mâché artisans the world over packing up their wares and heading for the nearest SF convention. Pasqualino is a slightly odd choice as the young Adama (his Italian retrofitting somehow more reminiscent of Keanu Reeves than of Edward James Olmos), and while Ben Cotton does his best, he’s very much fighting an uphill battle against cliché and pique. Blood & Chrome’s music, at least, is well done – kudos here to Bear McCreary, who also scored the 2004–2009 series and Terminator: The Sarah Connor Chronicles – but, truth be told, this still seems precious little upon which to hang even one’s small screen expectations.

The most obvious shortcoming of BSG:BC is, unsurprisingly, its script, which was set down like a bucket of soapy water by messieurs Taylor, Eick, Thompson and Weddle (all of whom were on deck when the revamped series started to sink). So as to avoid spoilers, let us imagine their plot in terms of another epic BC production – Homer’s Iliad:

There is, needless to say, a further twist, but by this stage the embers have burnt down and Homer has shuffled off to empty his bladder and gnaw on some old goat pieces. And the saddest part is, that capriciously transposing Battlestar Galactica: Blood & Chrome onto an ancient setting in no way makes it less plausible. (Indeed, the conscious disparity might well be said, through tacitly acknowledging the film’s Achilles’ heel, to have lessened the negative impact of its prickle-embedded and limping plot.) Because, in essence, BSG:BC is a free-floating morality-of-war film that pays scant attention to either the specific conflict or the details of the human/Cylon universe. It tries instead to force tension and adrenaline into scenarios that lack sufficient build-up, and to superimpose drama onto characters that have been dolloped up from the stockpot of eternal blandness. Worst of all, the filmmakers’ grasp of military tactics, strategy and grand strategy is… tenuous (mild censure of the day); or perhaps just simplistic (with all the tell-tale incision marks of a four-pronged lobotomy). Actually, the one term that springs most readily to mind is “General Melchett-like”, only without the requisite comic intent or a sardonic Blackadder character to play up the absurdity.

In some respects, watching Battlestar Galactica: Blood & Chrome is reminiscent of being shepherded across the road by a lollipop lady at a school crossing where there are no kids and no cars – an uneasy mixture of embarrassment and empathic condolences for all concerned. Yes, the name “Nate Underkuffler” does appear in the closing credits (for those who threw themselves grasping at straws, but missed), but surely, even in the most arid and undiscerning of parallel universes, that cannot by itself provide sufficient impetus for a movie to take flight…? And yet, BSG fans might smugly riposte, seven-point-four on IMDB, when even The Frighteners only managed seven-point-one…

Yes, well put it this way: if Mr T hadn’t taken a vow of silence, there’s every chance he’d even now be stomping around his mansion, tearing his mohawk out and proclaiming, “I pity the fool!”
Posted by Stephen Theaker