A Coming of Age by Timothy Zahn, reviewed by Jacob Edwards 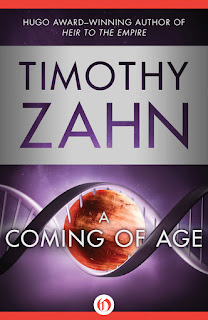 Second life, not secondhand. A Coming of Age by Timothy Zahn (Open Road, 2012).

When people who were born in the twentieth century grow old and look back upon their lives, one topic they are sure to reminisce about – to the utter bafflement of those younger generations who dutifully will now send forth their avatars to visit – is that of the secondhand bookshop; a dying breed even today, but each with its own idiosyncrasies and charm, its unique layout and ever-changing stock, its worn carpets, creaking floorboards and double-stacked shelves (or occasionally just high-risen piles that have become structurally integral), its ensconced, often erudite owner and of course its ever-curious and -acquisitive, peripatetic clientele of book-loving nomads, who whenever they arrive somewhere new find themselves drawn inexorably to the tell-tale bargain bins out front, and then nosing forward and inside, lungs swelling contentedly at the heady inrush of old book smells.

Ironically, what has doomed these esteemed bastions of the well-thumbed, pre-loved book is not, as one might have soothsaid, a groundswell of illiteracy, a flash fiction mentality or some mindless and storm-blown reverence for the blog-ridden txt (even if we oldsters-in-the-making tend to bristle more at such irritants) but rather an electronically expanded horizon and the gobsmacking globalisation of the bookshops in question. The world is now a warehouse. Bowerbirds of the printed word may line their nests merely with a click of the beak and have their eclectic reading materials delivered from anywhere on the planet. Moreover, with the advent of print-on-demand and ebooks, an author’s back catalogue need never be out of print; rather, the capacity exists for all heretofore-rare tomes to be stored and made available, without appreciable overheads, direct from the publishers. Bibliophiles be warned, the cursor is well and truly blinking on the wall.

Much though one might fulminate against this general affront to the way things were, nevertheless there must lie some insidious appeal in being able to lurk at home like a Bandersnatch and gratuitously just reach out and latch on to those skittish works that never previously strayed within range or set timorous foot in a secondhand bookshop. Such undeniably is the case with Timothy Zahn’s novel A Coming of Age, which first appeared in 1984 – the same year that Zahn himself came of age as a SF writer, winning a Hugo Award for his novella Cascade Point – and which now has been re-released in both POD and e-formats. So much attention has Zahn garnered over the last two decades for his serial novels and involvement with the Star Wars universe, that new readers might easily have overlooked the quality (indeed, in some cases the existence) of his earlier, stand-alone novels and shorter fiction. Gratifyingly, this need no longer apply. A few minor typographical errors notwithstanding, each bookshop owner’s dark plight becomes here the SF lover’s gain; and not just YA readers (who doubtlessly will be drawn in alongside the fourteen-year-old protagonist) but anyone who has cultivated an appreciation of clearly written, well developed, genuinely imaginative, ideas-driven science fiction.

The crux of Zahn’s scenario in A Coming of Age is the powerful telekinetic abilities that all children of the planet Tigris gain from five years of age and then lose upon entering puberty. The resulting power balance has considerable ramifications for Tigrian society, and yet Zahn explores this with the subtleness almost of peripheral vision, all the while keeping his readers absorbed and focused on two major (and one minor) intertwined storylines. The first of these centres on Lisa Duncan, whose childhood position of responsibility is about to segue (or perhaps plummet) into a daunting new adult life, her coming-of-age fears pre-empting an illicit interest in literacy and so bringing about an upheaval in her cosy but strictly regimented world order. The second follows the investigation of police inspector Stanford Tirrell and his preteen right-hand man Tonio as they search for a five-year-old boy they believe to have been kidnapped by a “fagin” – unscrupulous criminals who by proselytising and brainwashing exploit children for their teekay abilities. Zahn mixes urgency with suspense in recounting the various intrigues of A Coming of Age, but in contrast to some of his later novels – The Icarus Hunt, for example, or The Green and the Gray – makes no attempt to sustain one overriding mystery throughout the course of the story. Instead, he moves his twin plots forward on carefully laid tracks of dramatic irony: tantalising; revealing; forever taking the reader into his confidence, but only sufficiently to show the protagonists drawn deeper and deeper into peril.

Because A Coming of Age is so deeply enmeshed in its underlying conceit, each plot progression brings creeping with it a deeper appreciation of the (slyly dystopian) child/adult dynamic that Zahn posits. In this sense even the one slightly jarring feature of the book – Lisa’s dropping back to the periphery as events necessitate Tirrell’s greater involvement – can be seen less as a shortcoming and more as a young novelist’s aptly placed piece of discord, the disparity serving to resonate, however unnervingly, with adolescent ignorance and trepidations concerning what the future might hold. For those of us who would have been young adult readers when A Coming of Age was first released, such misgivings have long since been replaced with a stomach-pitted fear for the world’s secondhand bookshops (in all their dwindling number). The novel itself, however, has lost none of its allure or relevance – thirty years on and Zahn’s early work is every bit as fresh and compelling as when first it hit those musty shelves.
Posted by Stephen Theaker